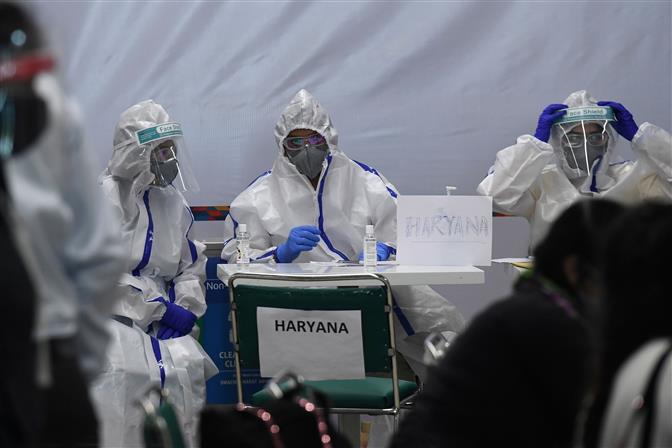 Palwal reported the 10 new cases of the deadly disease, taking the total in the district to 89.

Haryana, on Thursday, reported one death and 15 new cases of coronavirus, taking the state’s toll to 24 and case tally to 2,969.

Palwal reported the 10 new cases of the deadly disease, taking the total in the district to 89. Palwal recorded more cases after a gap of few days. Nine new cases had surfaced on June 1. All the cases have been traced as contacts of the positive cases detected earlier, according to health officials. The new cases have surfaced from Likhi village (3), Dudhola village (3), and one each in Mitrol, Huda Sector 2, Krishna colony and Hodal. A significant number of cases in Palwal have been reported in people who work in the NCR region—Faridabad, Gurugram and Delhi—and commute from neighbouring towns daily, claims Civil Surgeon Dr Brahmdeep Singh.

A total of 48 patients have been discharged after recovering so far in Palwal.

A 49-year-old man of Karan Vihar colony in Karnal died of COVID-19 at KCGMC late Wednesday night. He was brought to KCGMC at around 7 pm with stomach and lung infection.

During treatment, he died and his sample was taken which came as positive, said the health authorities.

It is the second death in the district due to COVID. Earlier, on April 5, a 58-year-old a resident of Rasin village had died at PGIMER in Chandigarh.

Nishant Kumar Yadav, Deputy Commissioner, said that the patient had a travel history to Bhadurgarh, where he was working. He used to come to Karnal on weekends, he added. He was being cremated.

According to the Health Department, he came to Karnal on Saturday and took his wife to a private hospital for a check-up on Sunday. Later in the evening, he had a sore throat and fever. He took medicine from a medical shop and after feeling better he went to Bhadurgarh on Monday, where he developed a stomach infection, said the health authorities.

Dr Ashwani Ahuja, Civil Surgeon, said that apart from him, four more persons have tested positive in Karnal. Among them, one each from Nilokheri, Arjun Gate, Meera Ghati and Balaji Colony. With these cases, the number of positive cases has reached 74 in the district.

A 24-year-old man of Katal village in Panipat also tested positive for COVID-19 on Thursday, taking the tally to 66 cases in the district.

Minister ‘forcibly’ gets houses painted in saffron colour in UP; residents lodge FIR