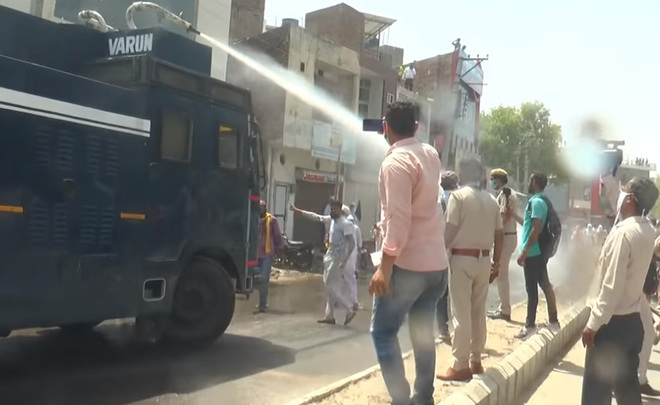 The police use water cannons to disperse protesting farmers in Sirsa on Wednesday. Tribune Photo

The police used water cannons to disperse a group of farmers, who allegedly tried to go past barricades when Sirsa MP Sunita Duggal and MLA Gopal Kanda arrived to cast his vote for the Municipal Council chairman’s post in Sirsa today.

MLA had voted against no-confidence motion

The farmers, protesting against the Centre’s new farm laws, gathered near the MC office where the police had put up barricades and raised slogans against Kanda, the president of the Haryana Lokhit Party (HLP).

Kanda had voted against a no-confidence motion brought against the Manohar Lal Khattar government in the Assembly by the main opposition Congress last month.

Farmer leaders had earlier said they would continue with their “peaceful social boycott” of leaders of the BJP and its allies.

Sirsa DSP Aryan Chaudhary said the protesters attempted to go past the barricades when the police tried to stop them.

The police managed to get the two leaders out of the MC office in their vehicles amid the protest.

Protesting farmers blocked BJP MP Nayab Singh Saini’s car in Kurukshetra district’s Shahabad yesterday, smashing its windscreen as he was about to leave a party worker’s home, the police had said.

Meanwhile, during the MC meeting, HLP-backed Reena Sethi secured 17 out of 32 votes and was elected the chairperson. She defeated BJP’s Suman Bamania, who polled 15 votes.