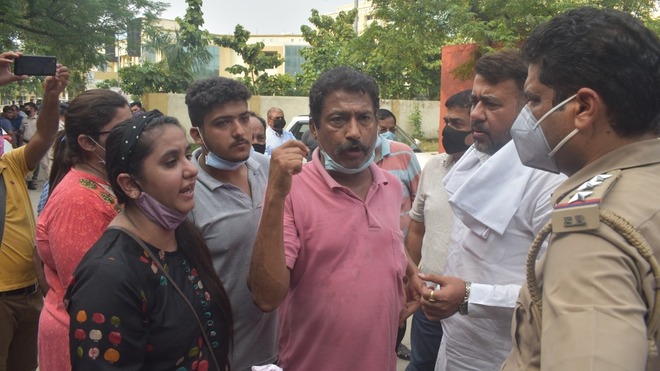 Family members of deceased Gaurav Aghi at the general hospital in Panipat on Saturday. Tribune Photo

A 44-year-old man reportedly ended his life by burning himself by pouring some inflammable material in Model Town on Friday. Prima facie, the police suspect a property dispute behind the incident.

On the complaint of the deceased’s wife, the police on Saturday booked his cousin, cousin’s wife and their two sons for allegedly compelling him to commit suicide.

Enraged, the family members created ruckus at the general hospital and refused to receive the body after the post-mortem examination.

The family demanded it would not take the body till the accused were arrested. The police tried to pacify the family but, till the filing of the report, they were adamant on their demand.

The deceased has been identified as Gaurav Aghi. His burnt body was found in his room on Friday. Before ending his life, he had called up his wife.

After getting information, DSP Sandeep Kumar and Inspector Yogesh Kataria, SHO, Model Town, reached the crime spot. The police have recovered a suicide note from the room. The police and FSL team have collected samples from the spot.

Gaurav’s wife Anju — in her statement to the police on Saturday — said that Amit Aghi, her brother-in-law, had finalised a deal of their house in 2013 for Rs 1.5 crore, but he neither got the registration done nor did he give them money. When they asked him about it, he threatened them with dire consequences.

Amit regularly threatened them saying that he had good relations with police officers, Anju alleged.

She further alleged that Amit, his wife Mamta and two sons Vansh and Lakshya assaulted them many times.

As per the post-mortem report, the cause of death was self-immolation, the SHO maintained.