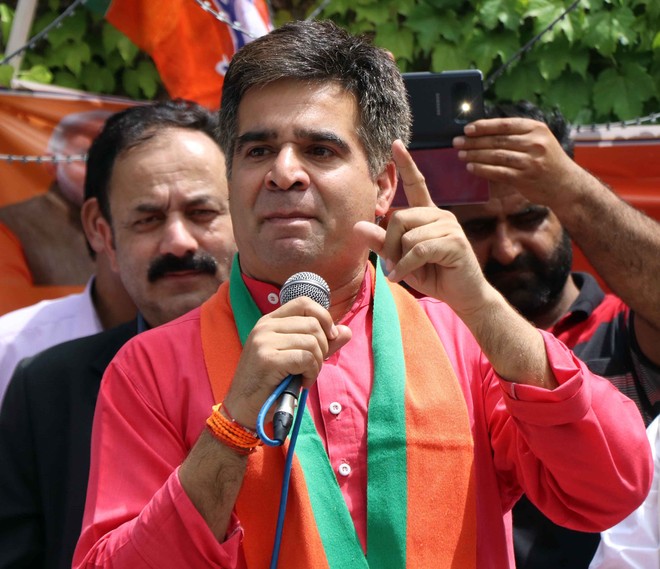 Opposing a dialogue with Pakistan till it stops “exporting” terror into Jammu and Kashmir, a BJP delegation led by J&K president Ravinder Raina at an all-party meet here on Thursday said those seeking engagement with the neighbouring country should meet the victims of violence to understand their pain.

The meeting, which was held to chalk out the future political course of action in Jammu and Kashmir, was convened by Prime Minister Narendra Modi and it had in attendance 14 leaders from the Union Territory.

The delegation called for intensification of efforts to root out the “sense of Pakistan, separatism and terrorism” from Jammu and Kashmir to provide a peaceful atmosphere to its people who are Indian to the core of their “heart, blood and DNA”, Raina told PTI at the end of the meeting.

He said the three-member BJP team, which also comprised of two former deputy chief ministers -- Nirmal Singh and Kavinder Gupta -- also pitched for constitution of an apex committee to hold dialogues with representatives of the Kashmiri migrant pandit community for their dignified return and rehabilitation in the Kashmir Valley at the earliest.

The BJP leader said he thanked Prime Minister Narendra Modi for his sincere efforts to end the political deadlock by holding the dialogue with prominent leaders from Jammu and Kashmir.

“The prime minister knows the heartbeat of the people of Jammu and Kashmir as he has lived among them for a long time, and knows their pain as well… Those talking about holding dialogue with Pakistan should know that India enjoys good relations with every country except Islamabad which has bled J&K for the past 35 years by exporting terror,” Raina told the meeting.

He said training camps for terrorists are still active in Pakistan-occupied Kashmir (PoK) and Pakistan, and in such a scenario, the policy of the Indian government is clear that gun and dialogue cannot go together.

“We have to root out sense of Pakistan, separatism and terrorism, and in this direction, efforts should be intensified,” Raina said.

He said that “Kashmiri pandits, Sikhs and nationalist Muslims had to flee their homes in the Valley in 1990 due to the Pakistani gun and migrate to different parts of the country”.

“We suggest the constitution of an apex committee to hold dialogue with the representatives of Kashmiri pandits for their dignified return and rehabilitation in the valley. The pandits are the ambassadors of the Indian nationalism,” Raina said.

He said the delegation also spoke about residents of Jammu and Kashmir who are living in areas under the illegal occupation of Pakistan. The government should pay special attention to them and become their voice as they are suffering the “worst kind” of human rights violations, Raina said.

Praising the prime minister, Raina said he understands the pain of the people of Jammu and Kashmir and is putting balm on their wounds ever since he came to power at the Centre.

“He was there among the people at Srinagar city centre Lal Chowk on Dilwali when they were hit by the worst ever floods in 2014 and announced Rs 80,000 crore special package for the development of J&K,” he said and listed various developmental projects in different sectors including health, education, roads, power and railways.

Defending the abrogation of Article 370 on August 5, 2019, Raina said that he told the meeting that the decision ended “grave injustice” of over 70 years with different communities including daughters of J&K, PoK refugees, West Pakistani refugees, Gorkha Samaj and Valmiki Samaj who were denied citizenship rights in the erstwhile state.

“People of Jammu and Kashmir are very happy after the abrogation of the Article 370 and expressed their faith by taking part in the democratic exercise which is evident from the 80 per cent turnout in the elections,” he said.

The BJP leader said he demanded addressing all issues being faced by Special Police Officers and Village Defence Committee members who have played a key role in anti-insurgency operations.

Raina said in the meeting he talked about the over one lakh casual labourers, daily wagers and need-based workers who are providing their services in 28 government departments for the past several decades and are demanding regularisation of their services.

The BJP delegation also thanked the prime minister for announcing a delimitation commission for Jammu and Kashmir, he said, adding they are quite sure that the process would be completed within the stipulated time and to the satisfaction of the people.

The delegation also hailed the Centre for strengthening the anti-corruption mechanism, Raina said, adding people of Jammu and Kashmir are happy as the move has tightened the noose around corrupt officers and politicians.

“We also thanked the Prime Minister for providing free vaccination against Covid-19,” he said. PTI