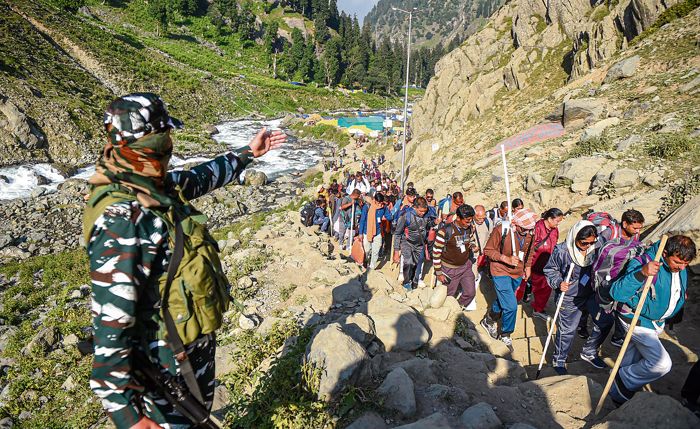 A security man stands guard as pilgrims proceed towards Amarnath shrine, at Chandanwari in Anantnag district of Kashmir. PTI

Hundreds of pilgrims, bracing cold weather and strong winds, today trekked through the treacherous mountains to reach the Amarnath cave shrine at 3,900 m in the Himalayas. The 43-day annual pilgrimage is taking place under heavy security after a gap of two years due to the Covid pandemic.

Chanting hymns, the pilgrims took the twin routes of Nunwan in Pahalgam and Baltal in Ganderbal to reach the shrine where many burst into cries at the sight of the yellow grills guarding the “Shivling”. At least 2,750 pilgrims, including sadhus and women, left the Nunwan base camp and trekked through Mahagunas Pass at 4,276 m to reach the shrine. Another batch of pilgrims opted for Baltal route. The J&K administration is expecting 8 lakh pilgrims to turn up this year.

Earlier during the day, Lieutenant Governor Manoj Sinha performed a puja to kick-start the pilgrimage.

I have full faith that the devotees travelling from all over the country will have a safe and memorable pilgrimage,” Sinha said. Senior members of the Associated Chamber of Commerce and Industry Kashmir (ACCIK), the Hoteliers Club and Kashmiri traders welcomed the pilgrims. “Yatris don’t need security as the biggest security for them are locals who have for centuries provided them all support,” said Mushtaq Ahmad Chaya, who heads the Hoteliers Club.

Tariq Rashid Ghani, who heads a traders’ body, said, “The local traders and hoteliers have assured full support to the administration for the success of the yatra.”

Sources said the security forces had made unprecedented security arrangements this year in view of a higher threat perception.

The peaks leading to the holy cave have been covered by the security forces and a round-the-clock vigil is being maintained. Apart from the deployment, drone surveillance and RFID chips are also a part of the three-tier security arrangements for pilgrims.

New Delhi: Union Health Ministry today said it was deploying several health personnel to assist Amarnath Yatra devotees and was also setting up two 50 bed hospitals as indoor facilities at Baltal and Chandanwari, in collaboration with the DRDO. “For the Yatra commencing from June 30 to August 11, health professionals, including doctors and paramedics, will be deployed in batches. The first batch will be deployed until July 13, second and third batches from July 11 to 28 and July 26 to August 11 respectively,” a statement said.