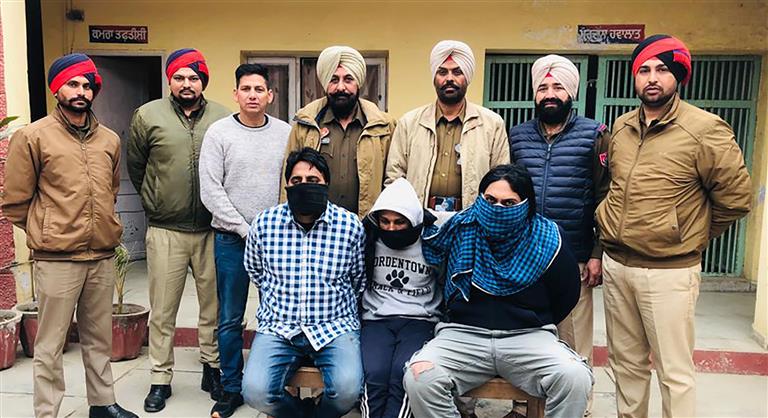 The rural police with the accused drug smugglers in Jalandhar on Tuesday. Tribune Photo

The Jalandhar rural police on Tuesday arrested three persons in two separate incidents and recovered a country-made pistol, four live cartridges, 100-gm heroin and a car from their possession.

According to Superintendent of Police Sarabjit Singh Bahia, a police team led by ASI Gurmeet Singh conducted a raid at the house of Baljinder Singh at Mohaddipur village in Adampur. He said the accused managed to flee the spot. However, during checking a country-made pistol and four live cartridges were recovered.

In another incident, following a tip-off, the Adampur police team put up a naka on Jandu Singha road and stopped a Nissan Micra car (PB10HJ3577) for checking.

In the car, three persons Baljit, Jagdish and Amandeep were present. During checking 100-gm heroin was recovered under the driver seat. A case under sections 21, 61, 85 of the NDPS Act has been registered against them, and further investigation is underway.