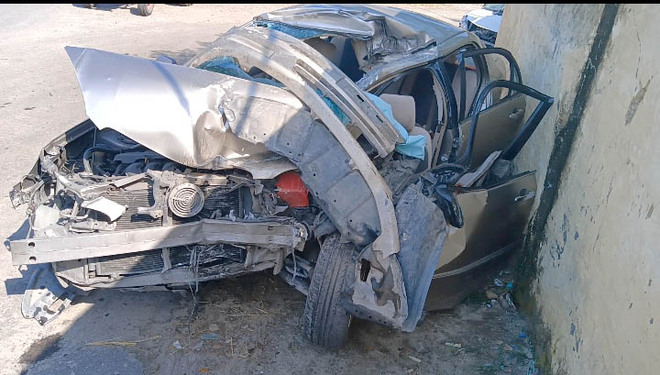 The mangled remains of the car after the accident near Pachranga on the Jalandhar-Pathankot road on Monday. Tribune Photo

Three persons of a family were killed after the car they were travelling in rammed into a vehicle on the Jalandhar-Pathankot highway near Kala Bakra on Sunday night. Besides, three persons were injured in the accident.

The deceased have been identified as Anup Singh (70), his wife Surinder Kaur (63) and her nephew five-year-old Arshia Kaur. They were returning after attending a wedding at Daburji village in Tanda when their Toyota Corolla car rammed the rear of a vehicle moving ahead at about 12.30 am.

The airbags of the car opened on impact. The complainant, who is a member of the bereaved family, alleged that abrupt application of the brakes by the vehicle in front of the car occupied by the family led to the fatal accident.

Bhogpur police have registered a case against an unidentified person under Sections 304-A, 279, 337, 338 and 427 of the IPC at the Bhogpur police station. The police said the complainant alleged that the accident was caused by a truck moving ahead of the family which abruptly applied the brakes, causing the vehicle behind to ram into it.

While Anup Singh was driving the vehicle, Surinder Kaur sat beside him on the front seat. Five-year-old Arshia Kaur Kunner was in Surinder Kaur’s lap. The three were killed on the spot.

Arshia is the daughter of Surinder’s real brother’s son. Anup and Surinder are residents of Defence Colony in Jalandhar. Arshia’s mother Prabhjot Kaur Kunner and her second daughter Ajuni Kaur Kunner were sitting on the rear seat. Another relative, Mehak Kaur, was also sitting along with them.

They are admitted to a local private hospital. While Prabhjot and Ajuni’s condition is said to be stable, Mehak Kaur is serious and on ventilator.

Barring Anup Singh and Surinder Kaur, who live in Jalandhar, the other four persons were US citizens and had come to India especially from the US to attend the wedding of Surinder Kaur’s real sister’s daughter at Daburji village in Tanda.

SHO, Bhogpur police station, Harinder Singh said, “The complainant, who is a family member, alleged that the accident was caused by the truck. The police are searching for the driver.