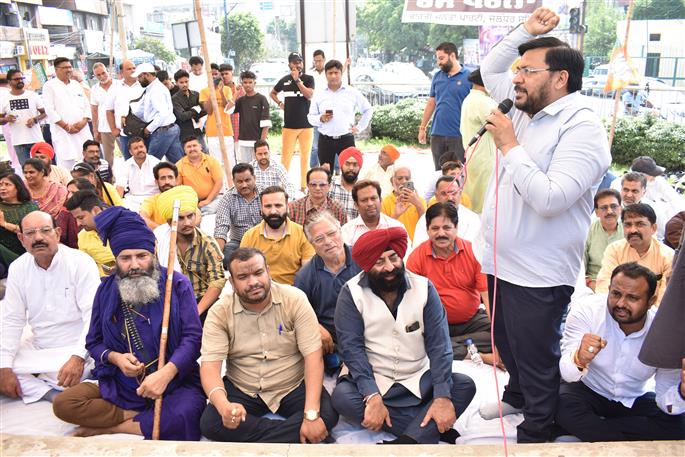 Local BJP leaders on Monday held a dharna at Bhim Rao Ambedkar Chowk against the state government. The dharna was held on a call by BJP state president Ashwini Sharma against the AAP for its confidence motion in the Vidhan Sabha, ‘misleading’ the Governor and for ‘violating’ the Constitution.

District BJP president Shushil Sharma and other leaders sat in front of the statue of Bhim Rao Ambedkar during the dharna.

BJP state general secretary Rajesh said, “CM Bhagwant Mann has lied to the state governor and also failed in his duties.” He termed the trust vote in the Assembly an unparliamentary proceeding and said the session was supposed to be held on other issues on which misleading information was provided by the state government.

Bhagha added that this scenario was unprecedented in the Vidhan Sabha and the proceedings initiated by the AAP will go down as unconstitutional, especially given the fact that the party had 92 MLAs. He said the party did not even need a trust vote or a confidence motion.

BJP leader Mohinder Bhagat said the AAP was indulging in propaganda to hide its failures. BJP leader Sarabjit Singh Makkar said law and order in the state had deteriorated.