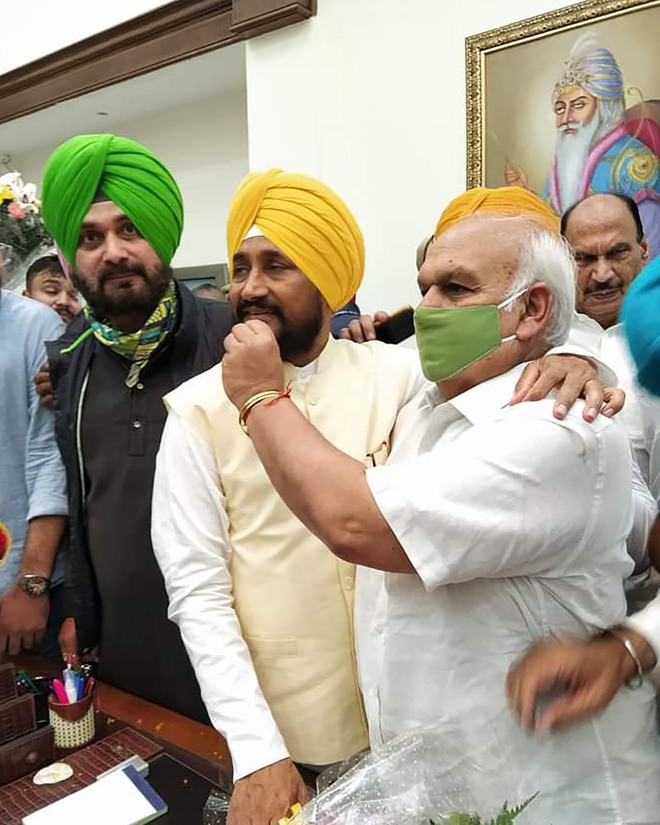 Changes in the Congress top brass in the past couple of days have suddenly shifted the political dynamics of Doaba region. Former minister Mahinder Singh Kaypee, who had been lying low since he lost the last Assembly elections, has become very active. Having wedded his daughter to the nephew of the new Punjab CM Charanjit Singh Channi, he was among the 40 special invitees for the swearing-in ceremony at the Raj Bhawan today. His photograph hugging Channi soon after the ceremony has been doing the rounds.

Kaypee’s supporters were quick to comment, “It will now be our leader’s choice as to which seat he wants, Jalandhar West, from where he had been contesting till the recent years, or Adampur, from where he contested in 2017 but was not lucky enough.” Though Jalandhar West MLA Sushil Rinku is very comfortably placed, but the fact remains that he owes a strong allegiance to former CM Capt Amarinder Singh’s camp and the sudden change of power has not gone in his interest.

As far as immediate gains are concerned, Pargat Singh seems to be quite a certain pick for a ministerial post. As he hosted a lunch at his official residence in Chandigarh for Channi shortly after his oath ceremony, Pargat’s wife Brinder Preet Kaur welcomed the CM and offered him ladoos. Navjot Singh Sidhu and Pargat’s brother-in-law and Shahkot MLA Hardev S Laddi Sherowalia were also present at the luncheon.

Another frontrunner for the ministerial post from Doaba is first-time MLA Bawa Henry. Sidhu has visited Henry twice at his place since his recent elevation in the party. Both Pargat and Henry are Jatt Sikhs, even though it has been the Dalits from the Doaba region who have been a common pick for the party. But now, since the CM himself is a Dalit, the old theory may not work, Henry’s aides said, adding that Jatts could be a more feasible choice.

If the party has to strike some balance by adding in MLAs of certain disillusioned groups of the party, then Sultanpur Lodhi MLA Navtej Cheema could be the pick from Capt Amarinder Singh camp and Jalandhar Central MLA Rajinder Beri from among ex-PPCC chief Sunil Jakhar’s favourites.