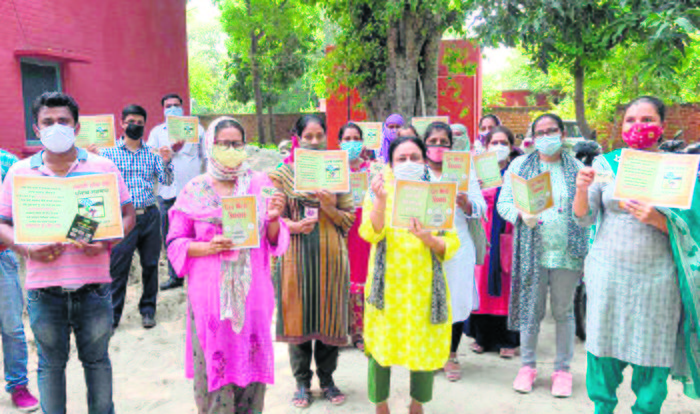 Members of the Sarva Shiksha Abhiyan, Mid-Day Meal Daftari Karamchari Union stage a protest against the state government over their demands in Jalandhar on Wednesday. Photo: Sarabjit Singh

‘Get well soon Punjab sarkar’ reads the front page of the card that the Sarva Shiksha Abhiyan, Mid-Day Meal Daftari Karamchari Union has sent in the name of Chief Minister Captain Amarinder Singh as a mark of protest.

Notably, the union members have been seeking regularisation. In a sarcastic comment, the staff members said the government was sending an unwell person to 14 days’ quarantine, but the government itself was in quarantine for the past three years because they were hardly working and not listening to the demands, which is why the card was sent.

Ashish Julaha, one of the active members of the union, said teachers appointed under the SSA in 2018 were regularised by the government, but the non-teaching staff that was appointed much earlier was still working on contractual basis, which was not right on the part of the government.

They have been demanding regularisation for long. They said nearly a 1,000 employees in Punjab had been working on contractual basis and were getting meagre salaries.

The protesters said most of the employees were getting wages ranging from Rs4,000 to Rs15,000, which was not acceptable. “Is it even possible to run families with such a meagre income?” they asked.

‘Unique protest’ not the first time

Earlier also, they held a series of protests by adopting unique ways. On January 24, the staff members had cut a cake made in the shape of a Twitter logo. The members wore caps, on which ‘24th January Anti-Promise Day’ was written. The CM in a message, tweeted a year ago, had said that he would regularise the services of the employees working on contract basis, but the promise was not fulfilled by him, which is why they decided to celebrate the day as ‘Anti-Promise Day’.

The tweet of the CM posted a year ago was printed on the cake. Also, to protest against the state government, the contractual workers had held a ‘Shok Sabha’ (condolence meet) of the manifesto of the Congress that was released before coming to power. The members had then said the promises made by the government had not been fulfilled.