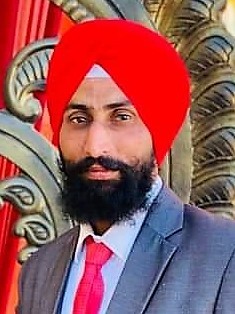 A farmer got killed in a road accident on Jalandhar-Jammu National Highway on Monday morning near Cholang. On the basis of the statement of Kuldeep Singh, a resident of Jahura village, the Tanda police have registered a case against an unidentified driver of a Baleno car. Kuldeep is the uncle of Jagmohan Singh (pic) who died in the accident. He told the police that when he, along with his nephew, was returning to Tanda on separate motorcycles from a dharna site at Cholang toll plaza near Saini Palace, a Baleno car hit another car ahead of him which went out of control and rammed into his nephew’s motorcycle. The deceased fell on the road and died on the spot. The couple in the car, Amit Kumar, a resident of Ludhiana and his wife Ramanpreet Kaur, also got injured. The injured were admitted to the government hospital in Tanda.