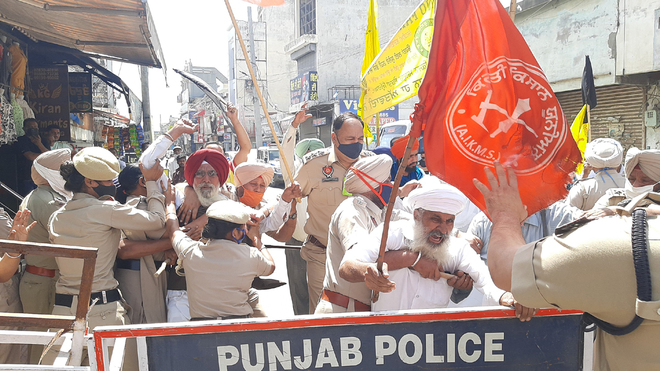 Farmers protest against Union Minister of State Som Parkash near the BJP office in Hoshiarpur on Sunday. Tribune photo

Union Minister of State Som Parkash had to face tough time as angry farmers tried to stop his vehicle near the BJP district office here today. The minister was here to hold a meeting with party functionaries and workers.

As soon as farmer organisations learnt about the minister’s visit, they tried to reach the venue to register their protest over the three agriculture laws.

Chandigarh: The BJP on Sunday alleged the opposition parties were instigating farmers against the central government to score political points. Former state secretary of BJP Vineet Joshi today claimed the AAP and Congress were responsible for the attack on Abohar MLA Arun Narang in Malout. TNS

The police had barricaded various crossings across the city to avert any untoward incident. However, some protesters managed to reach close to the venue and jostled with the police, but were prevented from moving ahead. The farmers then raised slogans against Som Prakash.

As the minister’s vehicle left the venue after the meeting, the farmers tried to stop it, but were blocked by the police. They registered protest by waiving flags at the car.

The district police and civil administration had been on their toes ahead of the Union minister’s visit, deploying a large number of police officers and personnel. SP Ravinder Pal Singh Sandhu and SP Mandeep Singh oversaw the security arrangements. — OC