With half of its term over, the civic body yet to ensure proper disposal of 500 tonnes of waste generated daily 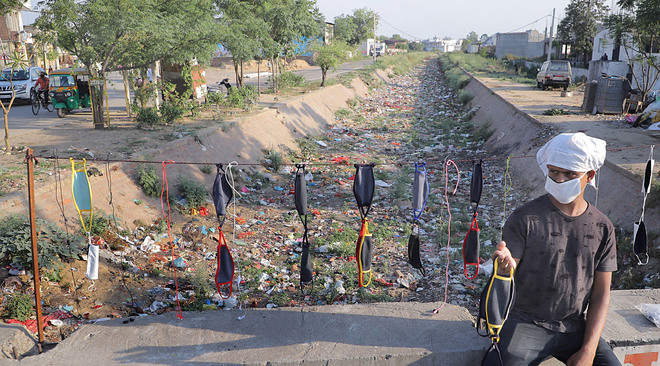 A youth sells masks along the banks of Bist Doab Canal which is filled with waste in Jalandhar. Photo: Sarabjit Singh

Even after completing half of its tenure, the Congress-led Municipal Corporation has not been able to ensure proper disposal 500 tonnes waste generated in the city daily.

Mounds of waste at the main dumping site are becoming bigger and taller, with the MC officials failing to find a new contractor to handle the proposed bio-mining project at the site. “We floated tenders but haven’t yet received any bid,” said Mayor Jagdish Raja.

About a decade ago, the MC had conceived a plan to set up solid waste-to-energy plant at Jamsher village that falls in the Jalandhar Cantonment constituency. But the villagers began opposing it after getting support from MLA Pargat Singh. After change of government, the project was shelved off. It has taken nearly 3.5 years for the incumbent government to plan the project afresh, but execution still remains a far-fetched dream.

According to the plan, waste collection and processing is to be decentralised for which 1,200 pits are to be set up by the MC across the city. The bio-decomposable waste would be used for production of manure for farmers and residents.

As of now, only three pits have been readied. These include one at Nangal Shama, the functioning of which has been stayed by the Punjab and Haryana High Court. The work of digging and creating shed at 40 marla site in Birring is also near completion and as of now, waste is being collected at a site around the pit. “The work on third pit falling at Dakoha is 80% complete. All three pits are on MC land and fall in the Jalandhar Central constituency. The manure of Nangal Shama pit had been tested and declared fit for use in agriculture by a laboratory of Punjab Agricultural University. We have also got an NOC from the Punjab Pollution Control Board. But as the matter is pending in the court, nothing can be done about it at present,” said MLA Rajinder Beri.

MC Commissioner Diprava Lakra said: “The pit at Birring will be operational in about eight days. The one in Dakoha may take 15 days. We had planned 29 pits in the first phase for which work orders were given to one contractor for 20 pits. Since labourers engaged by him have moved back home, there may be a delay in the project.”

Health Officer Shri Krishna Sharma said: “In Rama Mandi, we have earmarked three-four sites for waste management. But in places such as Urban Estates, where there are so many parks, we do not have even 2-kanal land in to dig up waste pits. In any case, we will have to work on decentralised models only as these are the best for waste management. These are also cheap as tippers do not have to be plied to far-away sites.”

On the Wariana site, the officials said B&R teams would have to get into action for compaction work and make inroads for garbage vehicles to enter and dump the waste. However, as a matter of little relief, the volume of garbage produced per day has fallen to 400 tons from 500 tons. Dr Sharma said: “Schools, colleges, hotels and marriage palaces, which are major producers of waste are currently shut.”