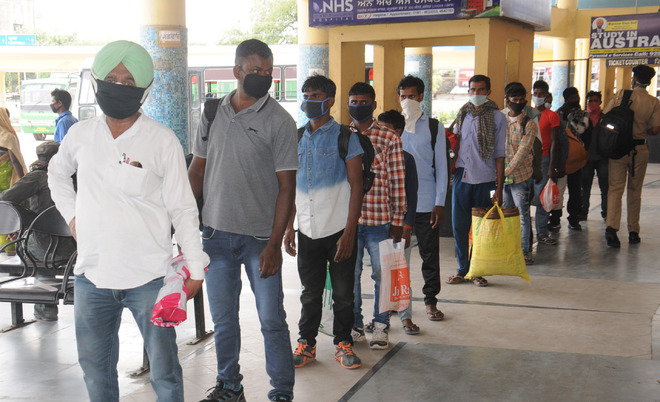 A long queue of passengers in front of a ticket counter at the bus stand in Jalandhar. Tribune Photo: Malkiat Singh

As no Shramik trains are being operated from the city railway station currently, migrants stranded here have started moving to Ludhiana.

Migrants in large numbers could be seen at the bus stand daily to board buses to Ludhiana. As the intra-state bus services resumed from May 20 onwards, buses are plying to various districts on a daily basis.

Gurdeep Singh, a supervisor at the bus stand ticket counter, said, 25 buses today ferried passengers to Ludhiana. The migrants failing to board Shramik trains in Jalandhar and Amritsar are considering Ludhiana as the last escape to return to their towns in UP and Bihar.

As per the directions of Transport Minister Razia Sultan, only 50 per cent occupancy is allowed in buses.

Yogesh Yadav, a native of Gorakhpur, who was residing at Bhogpur here, said, he did not receive any registration message from the administration here to board the special train. “One of my friends in Ludhiana told me that special trains are running from Ludhiana as well, hence without wasting a minute I immediately reached the bus stand to board a bus,” added Yogesh.

Prashant Kumar, another daily wager, who along with some of his friends had arrived at the bus stand from Amritsar, said they didn’t have any means of survival left here, so after waiting for almost a week here they’re expecting to board a special train from Ludhiana. Even after the relaxations in the lockdown 4.0, most migrants rued that they couldn’t get work here.