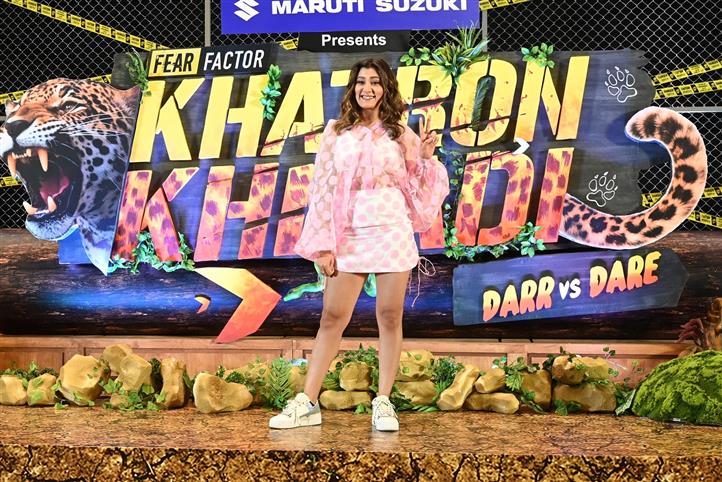 It’s not everyday that we get the opportunity to conquer our fears and explore life beyond limits. So, when you do get that chance, the best bet is to seize the moment. Just like Khatron Ke Khiladi participants, actor Arjun Bijlani and singer Aastha Gill, did!

Among the 13 warriors who signed up for the 11th season of the stunt-based reality show, which premiered on July 17, Arjun says he had it on his bucket list for a while now. “It is something I really wanted to do... Khatron Ke Khiladi is one show that gives you the thrill and you even get paid for it.” For Aastha, it took a lot of thinking before she said yes. She says, “Initially, I was reluctant. I thought and then realised I wanted people to see this side of me too.”

With Cape Town making for a perfect setting for some jaw-dropping action, the host, Rohit Shetty, will be seen throwing tough challenges at the contestants, like getting fired through a cannon, performing aerial acts, getting electrocuted and having face-offs with wild animals! In his journey on the show, Arjun defeated two of his biggest fears. “I could never imagine being in cold water. There was always this phobia. Creepy crawlies was the other one, but I faced both my fears. I dived into chilled water and was surrounded by insects. I even developed a rash; it wasn’t easy.” Aastha too has a deep fear of insects and even after dealing with them on the show, she still couldn’t get over the phobia.

Since the pandemic has spawned anxiety, the show, these two artistes believe, will elevate the mood of people. In Aastha’s opinion, “It would be a very entertaining package because there are a lot of emotions, a real display of courage, so those going through a low phase might get the strength when they see the participants putting up a fight.”

Adds Arjun, “I think everybody has gone through a lot during the pandemic. Having said that, we all want to work. We have to provide for our families and given an opportunity, calculating the risk, I think Khatron Ke Khiladi is something that I wanted to do. If I wouldn’t have done it, someone else would have. So it was a conscious decision.”

While they are all-praise for the team behind the show, they are really in awe of Rohit Shetty. “He is very strong and knows what he is doing. He was very supportive throughout the show,” says Aastha. Ajrun adds, “I don’t think anybody else can host the way he does. He’s humble and was a guiding force for all of us. A lot of times we would give up in between a stunt, but then he pushed us to do it.”

“This season of Khatron Ke Khiladi is extremely special because seven years ago I started my journey as the host of the show in Cape Town and we are back in South Africa for a brand-new season. The thrill quotient is at an all-time high as the new season will have some action-packed stunts! As the beautiful Cape Town turns into a battleground, the DarrKe Warriors will be tested and scrutinised at every step of the way, and only the real warrior will survive,” says the host Rohit Shetty.