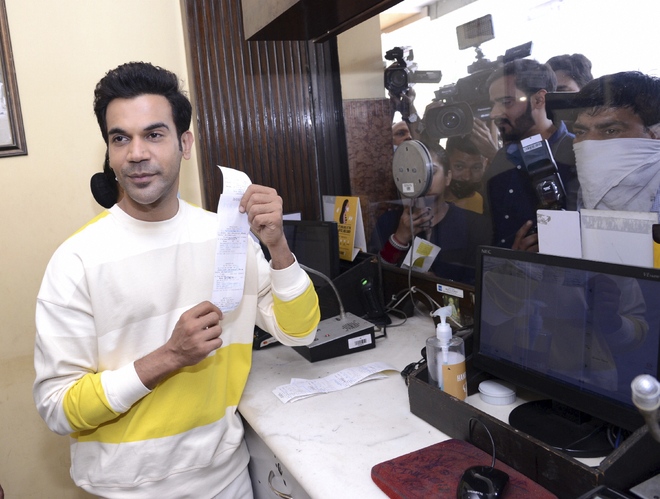 oon after the OTT giants announced their impressive line-up of upcoming movies, specials, originals and series, it seems cinema halls are now ready to offer a tough competition. The audience is no more content with just Netflix, as evident from the crowd that showed up for the opening of the movie, Roohi. The corona scare is not enough to keep the public out of theatres.

With promotions in full swing, the star cast of respective movies has not left a single stone unturned to create a hype. Janhvi Kapoor and Varun Sharma, the lead actors of Roohi, also relived the magic of the big screen by watching the film with their fans in Chandigarh and Mumbai, respectively. Janhvi and Varun graced the premiere event on Wednesday night at PVR Elante Mall, Chandigarh to encourage the audience to walk in theatres for the prefect horror-comedy experience. Janhvi has been shooting in Punjab for her next film Good Luck Jerry since January. Not just the horror comedy Roohi, but the special screening of the war movie, Fauji Calling, was also held at Elante wherein Chief Minister of Haryana, Manohar Lal Khattar and other cabinet dignitaries marked their presence. To show support to the filmmakers, many states such as Haryana, Delhi and Jharkhand have declared Fauji Calling tax-free. Starring Sharman Joshi, Ranjha Vikram Singh and Bidita Bag, it is a heartwarming story of a soldier and the turmoil his family goes through when he is in the battlefield.

A spokesperson from PVR Elante says, “Numbers have never been this good since last March when the pandemic broke out. I think people are now positive (not corona) about stepping out and they have put their trust in PVR cinemas as we have taken all the measures to ensure the safety of the audience. Moreover, since the announcement of hundred per cent occupancy, it is only now that a movie of such a big scale has been released, excluding the Hollywood releases.” He adds that they have seen close to 300 entries by the afternoon show, which is promising for the weekend.

Not to forget the date coincides with Mahashivratri, making this holiday an opportunity for a family outing to the nearby mall. Raj Juneja, distributor representative, on the contrary holds an opinion that because of Shivratri, many families were busy visiting temples, so the numbers would peak by the evening or on weekends. He adds, “The stage is set, the response has been great, and we are looking forward to more movie announcements in coming weeks. As of now, two movies Mumbai Saga and Sandeep Aur Pinky Faraar will be releasing on March 19.” Multi-starrer Mumbai Saga has John Abraham, Emraan Hashmi, Sunil Shetty, Prateik Babbar, Rohit Roy, Jackie Shroff and Gulshan Grover. On the other hand, Sandeep Aur Pinky Faraar is a thriller starring the Ishaqzaade jodi, Arjun Kapoor and Parineeti Chopra.

Those, who walked out of the theatres after watching the film, say, “It’s not about the movie now, but the feeling of sitting in a theatre and watching a film with family and friends after so long was great.” As far as safety is concerned, not just the staff members of the cinema halls but also the visitors are adhering to the basic hygiene—masks, sanitisers and social distancing.