Diljit Dosanjh-starrer Jogi reopens wounds of Punjab. Here's a look at other films on barbaric 1984 riots... : The Tribune India

Diljit Dosanjh-starrer Jogi reopens wounds of Punjab. Here's a look at other films on barbaric 1984 riots... 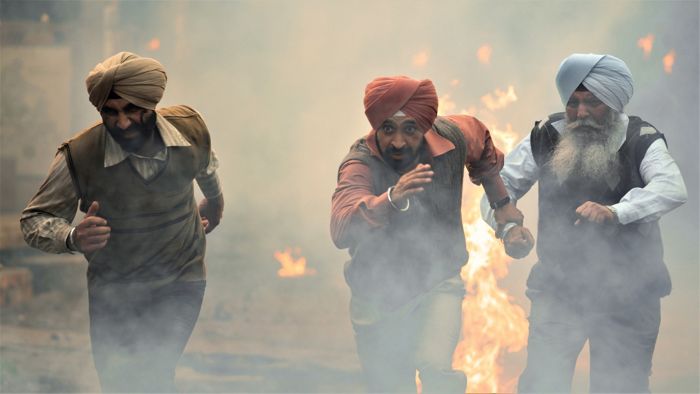 It takes a lot more than courage to bring forth the wrongs of the history. However, attempts have been made and many gruesome historical facts have been captured in novels, films, web series and documentaries. As actor Diljit Dosanjh-starrer Jogi premiers on Netflix this Friday, we list other works on 1984 anti-Sikh riots and the various narratives that cinema explored.

Gulzar’s Maachis, which he wrote and directed in 1996, was the first attempt to bring out 1980’s Punjab on celluloid. He stayed true to historic facts in his fictionalised version of Punjab’s turbulent times. The 2003 Punjabi film Hawayein, directed by Amitoj Mann, starred Babbu Mann and Mahi Gill in the lead roles. Amitoj, who also acted in the movie, says, “I was approached by Dr Raman Kumar, who offered me a role in a film he was making on this subject. When I heard the script, I didn’t agree with his viewpoint. So, I did my research and wrote a script based on 1984 incidents. As a director, I feel while working on such sensitive projects, one shouldn’t take creative liberty to distort facts.” Films of the likes of Amu, Kaya Taran, 1984: A Sikh Story, Kush, Dilli 1984, 47 to 84, Rubaru Roshni and 31st October were made on the same subject.

Hawayein helped many other Punjabi filmmakers to work on this subject and talk about the unspeakable crimes committed against Sikhs during the riots of 1984. Des Hoyaa Pardes with Gurdas Maan was another film on the same topic which came out a year after. Directed by Manoj Punj, the film took home the National Award for Best Feature Film in Punjabi. A web series Grahan on the same subject was released on Disney+Hotstar which was based on Chaurasi by Satya Vyas.

Punjab 1984: It starred Diljit Dosanjh. In this film a mother (Kirron Kher) tries to find her missing son, who is illegally taken by the police. It was a turning point for Diljit’s career.

Chauthi Koot (The Fourth Direction): Directed by Gurvinder Singh, the film follows two different stories after the Operation Blue Star. It was shot in Amritsar and Ferozepur and based on two short stories from Waryam Singh Sandhu’s 2005 collection Chauthi Koot.

In September last year, Vivek Agnihotri took to Twitter to announce The Delhi Files as the last film in his trilogy of fiction films on true incidents. A film called Widow Colony was also announced by Gippy Grewal, which is written and directed by Smeep Kang.

Meanwhile, actor Diljit Dosanjh ahead of the release of his film Jogi, directed by Ali Abbas Zafar, has talked about his experience. He said, “Working with Ali bhaji on this project was very collaborative. As a team they are always in sync and for an artiste it’s relieving when the process of making is enjoyable. It is important that a story be told in a credible yet sensitive manner.” Jogi is set in Delhi in 1984. It charts the story of three friends who unite to save hundreds in their town. It will premiere exclusively on Netflix on September 16. — ians