The documentary Schumacher, on Netflix, brings alive the journey of the greatest Formula One driver 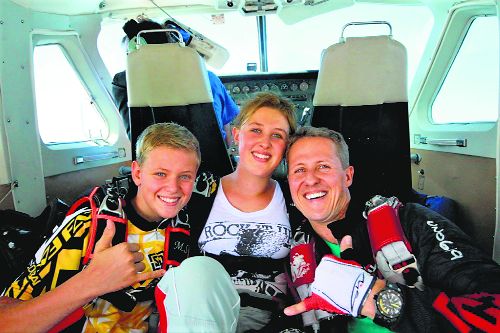 When a 23-year-old burst into the Formula One racing scene with giants like Ayrton Senna and Damon Hill ruling the scene, the general consensus was ‘too young, too early, too soon’. His was a promising start that eagles were watching, but that he would be a sensation he proved soon after. The documentary titled Schumacher, in German and English, directed by Hanns-Bruno, Kammertöns Vanessa and Nöcker Michael Wech, is about his journey — from when he was barely four and his father put him into ‘go karting’, to him taking on giants with Jordan, Benetton, Ferrari and Mercedes.

‘You have to be one with the car’, says the seven-time champion, who couldn’t but give his one hundred per cent all the time. Natural talent he was, but he honed his skills to dizzying heights — to give German Grand Prix their long-awaited German champion; give Ferrari its first win in 17 years to being the best-paid athletes in sports history.

His brother Ralf Schumacher talks about their childhood in one single sentence, “Our parents worked hard to give us a normal childhood, but lots of rich kids are poor because they don’t have time with their parents.”

The documentary showcases his track record, rivalries; old recordings and interviews from his professional life and by family members. It also reveals bits of his personal life — a caring husband, a doting dad and a party-lover. It is an insightful glimpse into the making of this great athlete.

Then comes through his steamy side as well — A Capricorn who made no mistake; his rivalry with Senna, who lost life while just trying to keep ahead of him, and years later breaking down at a press conference as he equalled the Brazilian racer’s record! The collisions with Damon Hill at the 1994 Australian Grand Prix and Jacques Villeneuve at the 1997 are also revealed. He didn’t want the press to make him a star, his graceful exit to equally sensational comeback makes it to the 1hour 52minutes documentary too. While his professional prowess wins the limelight, his soft side shines through his speeches as he always shared credit with the efficient machine, supportive wife, Corinna, and superb teammates.

While his father, wife, children and friends make it to the documentary, one still wants to see more of Schumacher in his personal space. We do gather that he loved to party — was the first to reach, last to leave, loved dunking people in the pool in his signature style, and his love for extreme sports, sky diving to skiing, which eventually became his nemesis. Just like he protected his family, now the family is doing the same after the accident he suffered in 2013. Sadly, one doesn’t get to know the state he is currently in through the documentary.