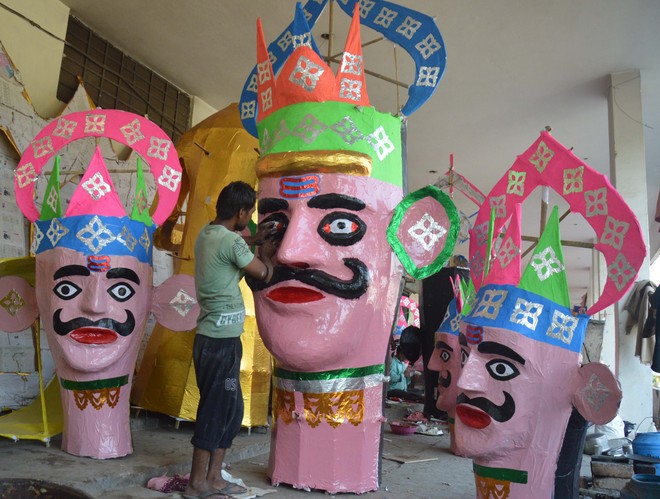 Artistes give final touches to the effigies of Ravana, Meghnad and Kumbhkaran ahead of Dasehra at the Daresi ground in Ludhiana. Photo: Inderjeet Verma

A 100-ft effigy of Ravana will be burnt at the Daresi ground in the city to mark the Dasehra celebrations.

Last year, Dashera was a low-key affair due to the rising number of Covid-19 cases and many Dashera committees had given the celebrations amiss. Last year at Daresi, only a 30-feet effigy was prepared and burnt among a few people.

Like every year, Ali Asgar had come from Agra to prepare effigies of Ravana. He has managed to get five-six more orders from the city. Giving the message of communal harmony and brotherhood, it has been 29 years since Asgar had been coming to the city to prepare the effigies.

“This year will go off better. Last year, the pandemic had casted its effect on the celebrations and there were hardly any events. This year, I managed to get seven-eight orders. Though before the pandemic, we used to get nearly 30-35 orders,” he said.

Dasehra at the Daresi ground is the main attraction not only for city residents but also from people from periphery areas, who also visit the place for the celebrations.

“Daresi will have the highest effigy at 100 feet and we are waiting for the final day,” Asgar said.

Another effigy maker at Dugri was also excited for the festival. “Last year there were no celebrations and this time, Dashera will be celebrated. “I am preparing the effigy for the Dugri ground and two more places,” he said.

Children who had to give Dashera amiss last year are all geared up for the festival this year.

“Dashera is my favourite festival and last year since there were no celebrations we had made a small effigy at home but this year we will be going to the Dashera ground to see the effigy go up in flames,” said 10-year-old Rudra.