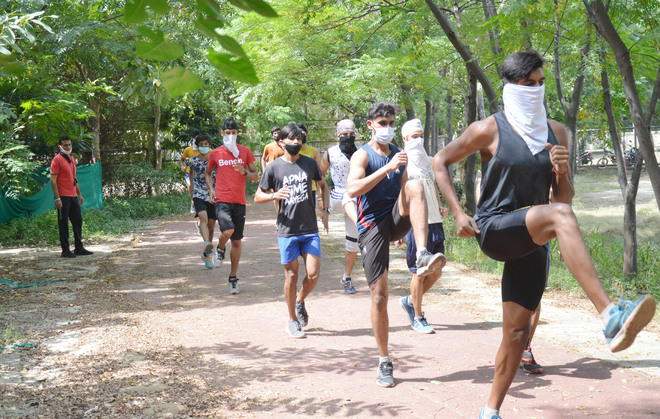 It has been almost six months that there are no sports activities due to the Covid-19 pandemic. Following the nationwide lockdown, the sports wings at schools and colleges, coaching centres run by the Punjab Sports Department across the state and those of the Sports Authority of India (SAI) here were shut down in the last week of March.

Players are advised to bring their own mats, water bottles and sanitiser bottles though the latter are also provided by the Sports Department. Every participant shall wear a face mask all the time as per the guidelines. Smoking and spitting in the stadia is strongly prohibited.

Finally, the restrictions have been relaxed and sports complexes and stadia opened subject to compliance of the standard operating procedure (SOP). Initially, permission was given for four activities — athletics (track and field), morning and evening walk, golf and yoga with provision of sanitiser and thermal scanners at the entrance of stadia and sports complexes.

The authorities gradually allowed activities in other sports disciplines also with the condition that the general fitness sessions would be held only with no body contact and every player would use his own equipment, which shall not be shared by another person/player.

Ravinder Singh, District Sports Officer (DSO), Ludhiana, said trainees in almost all games were attending the centres, following the guidelines issued by the authorities. They take part only in general fitness exercises except for athletics and yoga wherein players are permitted to follow their regular schedule.

Sanjiv Sharma, athletics coach of the Punjab Sports Department, who also gives coaching at Guru Nanak Stadium, informed the state and national-level athletes (local) only were asked to attend the training sessions so that they did not lag behind their competitors (psychologically) during the competitions whenever the restrictions were lifted totally and tournaments were held.

“We started our activities at Satish Chander Dhawan Government College for Boys as an experiment to adhere to the Covid-19 guidelines. Initially, there were 12 athletes, and then four boys were added to the group after each fortnight. We resumed the proceedings at Guru Nanak Stadium after a gap of three months and at present there were 28 athletes who were imparted coaching in batches. Prior to the outbreak of Covid, around 100 athletes (boys and girls) used to visit the centre daily,” Sharma said.

The DSO said they followed the instructions and advisories on management of Covid-19 as issued by the State Health Department from time to time.