30-ft effigy of Ravana to come up at Daresi Ground; Meghnad, Kumbhkaran to get a miss 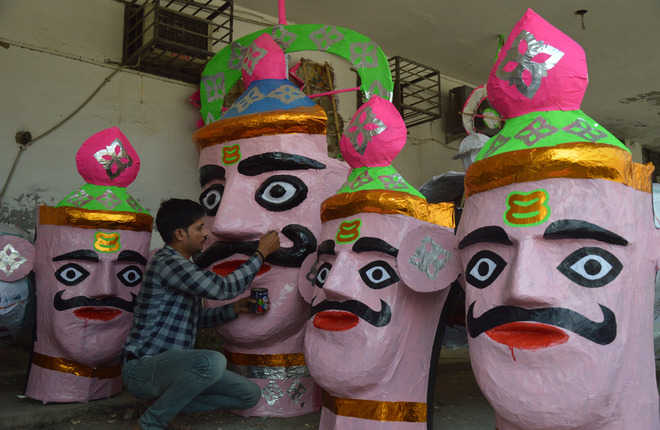 The pandemic has cast its spell on festivals too. With a majority of the Dasehra committees here avoiding celebrations this year, the orders received by the effigy makers are minimal this time.

Not only has the number of orders, the size of the effigies has also seen a dip. Only 30 per cent orders have been received by the effigy makers this year. There are very few orders for Meghnad and Kumbhkaran.

Giving the message of communal harmony, it has been 28 years since Ali Asgar has been coming to the city from Agra to make effigies of Ravana. This year, it was just to carry on with the custom that Ali Asgar, along with his sons, came to the city.

A software engineer by profession, 22-year-old Imran Khan, son of Ali Asgar comes along with his father to extend a helping hand to him and carry forward the tradition.

“This year, we received only 10 orders, while every year we used to get 30-35 orders from the city. A majority of the Dasehra committees are giving celebrations a miss,” said Khan.

He added that they

Last year, the tallest effigy of Ravana in the city was set on fire at Daresi Ground, which was 95 feet tall and was made by them.

No fair and public gathering, only a few VIPs with small gathering will be held at Daresi Ground to keep the tradition alive and the effigy of Ravana will be burnt.

“Some Dasehra committees are getting the effigies of around 10-15 foot made,” said Imran Khan.

Asgar Ali said every year, 30-35 workers used to accompany them, but this year only 10 are at work and Dasehra will be a low-key affair this time, he said.

Meanwhile, the Dasehra committee has decided the live telecast of the festival evening.

Only 30 per cent orders received for effigies

Not only has the number of orders, the size of the effigies has also seen a dip. Only 30 per cent orders have been received by the effigy makers this year. There are very few orders for Meghnad and Kumbhkaran.