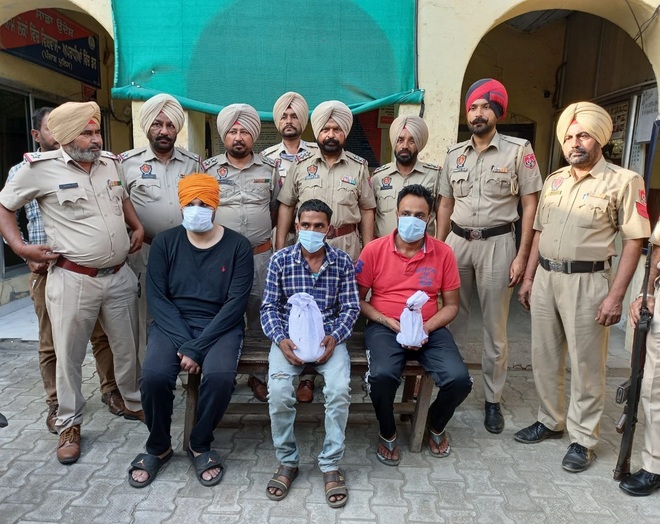 The three drug smugglers in police custody at Doraha.

The police arrested three drug peddlers and recovered 3.1 kg of opium from them.

The SSP, Khanna, Gursharandeep Singh Grewal, disclosed that with the efforts of DSP, Payal, Devinder Kumar and SHO, Doraha, Nachattar Singh, the police have caught three drug peddlers with 3.1 kg of opium. The three drug peddlers have been identified as Harmeet Singh of Haibowal Khurd, Ludhiana, Ravinder Singh of Iyali village, Ludhiana, and Sivom of Fatehganj, Bareilly, Uttar Pradesh.

The three have been remanded in police custody.

The DSP, Payal, Devinder Kumar, said the police party had set up a naka near the Punsup godown. Two drug smugglers Harmeet Singh and Ravinder Singh, who were coming from the Khanna side and heading towards Ludhiana in a Baleno car (PB 10 FH 0555), were stopped on the basis of suspicion. On search, 500 gm of opium was recovered from them.

On investigation, it was revealed that the third smuggler, Sivom, was following them in a truck number PB 23 M-3445 from whom 2.6 kg of opium was recovered. All the three have been arrested and the truck and car impounded.

A case under the NDPS Act has been registered.