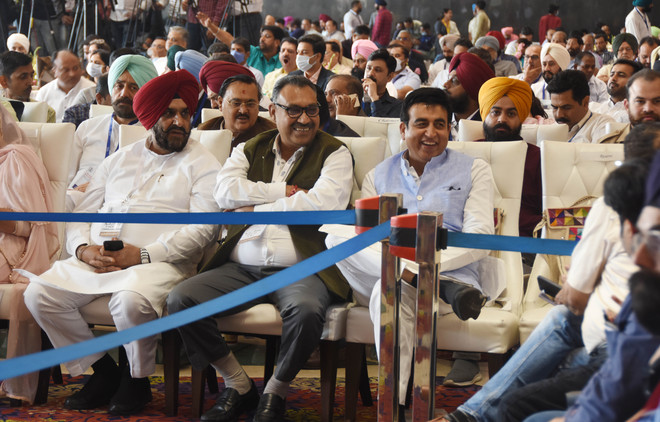 Ludhiana has fetched big investments from investors gathered at the two-day Progressive Punjab Investors’ Summit-2021, which culminated here on Wednesday.

Local, NRI and foreign industry honchos pledged new projects and expansion of their existing units at an estimated investment of Rs 2,800 crore.

This was more than one-third (precisely 36.46 per cent) of the total investments worth around Rs 7,680 crore that the state has attracted during the annual mega investors’ show, held for the first time in Ludhiana.

The major investments that came to Ludhiana on Wednesday included Rs 2,600 crore from an NRI and Rs 200 crore from the Vardhman Group.

Promising a real estate and hospitality project in Ludhiana, an NRI, Meenu Malhotra, from the UK, said he had recently executed a small project worth Rs 250 crore in the real estate sector.

“Now, I’m so motivated that we are coming up with another project by investing Rs 1,600 crore in the real estate and hospitality sectors,” he told The Tribune.

He announced development of the Imperial Golf Estate in Ludhiana, as part of a NCLT process, with a total investment of Rs 1,600 crore. The land upon which the township extends spans to 300 acres.

“Intention is to develop, upon this site, a series of world-class facilities. This will involve a bespoke 18 hole golf course, designed (by Jack Nicholas), a five-star hotel, international schools (junior and senior) in collaboration with prominent educational institutions based in the United Kingdom, a health farm with spa facilities, and a multi-faith temple,” Malhotra said.

The project will also offer 280 homes and a variety of apartments and plots for development. There will also be a provision for economically weaker section (EWS) housing spreading over 10 acres.

This will be in continuation to earlier project worth investment of Rs 1,000 crore filed by the NRI with Invest Punjab in 2020 to develop a world-class township at Hambran in Ludhiana.

“My experience in Punjab has instilled a confidence about the proactive approach of ease of doing business and conducive business ecosystem in the state,” added Malhotra.

Another investor, Sucheta Oswal from the Vardhman Group, announced an expansion of their operations in the state at an estimated investment of Rs 600 crore.

Elsewhere, a South Korean company Sunjin India Feeds Private Limited announced Rs 80-crore investment in Patiala. The company’s managing director, Gi No Park, said they had already purchased a land and were in the process of beginning the setting up of the unit.

Sunjin India, which is a South Korea-based company and is starting its India journey from the state, will be setting up a feed mill plant for manufacturing animal feed with foreign direct investment (FDI) of Rs 80 crore (10 million dollars).

Another local investor, Sonalika Group, pledged another Rs 1,000 crore investment to expand their existing tractor manufacturing plant in Hoshiarpur worth over Rs 1,000 crore.

“This shows that the government has been able to create trust and confidence among Punjab, national and international community. We need to tread on this path forward and further build on the momentum,” said Invest Punjab Chief Executive Officer (CEO) Rajat Agarwal.

He said the government had been clearly able to create a good and investor-friendly ecosystem in the state.

“The investors seem to be confident about the state and seem to be assured and reassured as was the theme of the summit,” he asserted, while adding that the confidence of NRI bank in Punjab seems to be returning, demonstrating the healthy NRI investment arrival to the state.

Agarwal said not only the textile sector and home-grown industrialists of Punjab have shown confidence but the confidence of foreign companies and countries, which were not traditional to Punjab like South Korea, has also been built.