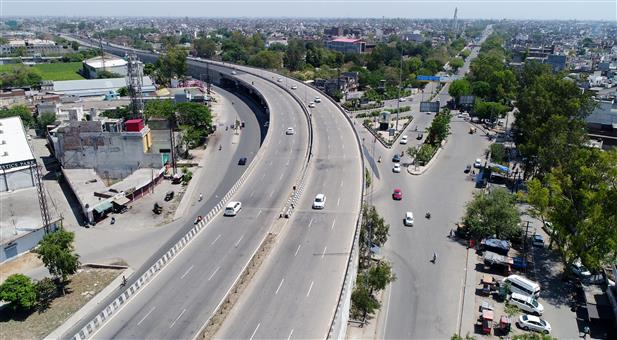 A view of the Ludhiana bypass. Tribune photo: Himanshu Mahajan

Stiff resistance of farmers to part away with their land coming under the proposed Ludhiana-Ropar expressway was delaying the acquisition proceedings, it is learnt.

So far, less than 5 per cent of the total 597.27 hectares land, falling under 71 villages, required to be acquired for the 116-km-long greenfield project to be built at the cost of Rs 2,792 crore, could be acquired and possessed in Ludhiana district, the officials have said.

A majority of 84.9-km stretch of the proposed expressway on National Highway 205K, which the National Highways Authority of India (NHAI) has approved as 4-6 access-controlled highway with a route alignment connecting Manewal village in Ludhiana on the upcoming Delhi-Amritsar-Katra expressway with Bheora village near Ropar, falls under Ludhiana district.

Sharing details, the Deputy Commissioner, Surabhi Malik, told The Tribune, here on Thursday that the district administration was constantly perusing the landowners to accept the awarded amount and allow the possession of their acquired land to pave way for the construction of the greenfield expressway, which includes a 19.5-km spur from Pipalmajra to Kharar with Ludhiana bypass, and was being developed under the Bharatmala Pariyojana Phase-1.

She said that a sum of Rs 565.07 crore had already been awarded for acquisition of 597.27 hectares of land required for the expressway, which was being built in two parts under the hybrid annuity model (HAM) mode, and will connect Ludhiana, Ropar and Mohali districts, but the disbursement of only Rs 45.9 crore, accounting for 7.61 per cent of the total award money, could be made to the landowners so far.

Malik said the physical possession of land required to build the 4.2-km expressway, which accounted for 4.95 per cent of the total area under acquisition, was taken so far.

While the first component comprises a 37.7-km-long stretch of National Highway 205K, the remaining 47.2-km-long portion, including Ludhiana bypass, besides 19.5-km-long spur will be executed in the second part.

Under the HAM mode, 40 per cent the project cost was provided by the government as construction support during the construction period and the balance 60 per cent was paid as annuity payments over the operations period along with interest thereon to the concessionaire.

Route: To start from Delhi-Amritsar-Katra expressway (NE-5) near Manewal village in Ludhiana and terminate on NH-205 at Ropar near Bheora village. Besides, a spur from Pipalmajra to Kharar will connect Ludhiana bypass.

We have expedited the ongoing process to take physical possession of the acquired land for the project. We will ensure time-bound completion of all the major infrastructure development projects in the district. — SURABHI MALIK, DEPUTY COMMISSIONER