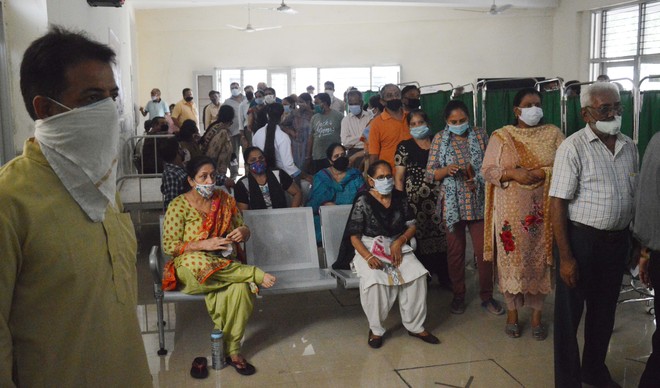 A huge rush for Covid vaccination at the Civil Surgeon’s office in Ludhiana. Photo: Inderjeet Verma

Ludhiana, which was the first district in the state to launch vaccination at doorstep by holding mobile camps, has slipped from fourth to seventh spot in the per lakh Covid inoculation in the state.

The data, compiled by the Health and Family Welfare Department, a copy of which is with The Tribune, revealed that Ludhiana recorded 17,686 per lakh vaccination coverage till May 1, which was more than the state average of 14,691.

We have placed an order of 30 lakh doses of Covishield with SII and made an advance payment of Rs10.37 cr. However, no schedule for supply has so far been received. We have been told that availability of Covishield will be known in about four weeks.

However, the inoculation speed came down from 1,36,172 per million vaccination coverage reported till April 14, which was way ahead than that time’s state average of 99,887.

Mohali beat Pathankot to top the state with maximum 27,478 per lakh vaccination. Pathankot slipped to second slot with 22,178 coverage after remaining at the top with maximum 1,70,262 per million inoculation till April 14.

Wait continues for below-45 age group

The state government was yet to launch the vaccination of 18-44 age group, even five days after the Centre had allowed the inoculation of the population between 18 and 44 years.

However, a few private facilities, which have procured the vaccine stock directly from the manufacturers, have started giving jabs to the below 45 age category.

As per the Centre’s new policy on vaccination, the manufacturers were giving 50 per cent of the total vaccine production to the Union Government, while the rest half vaccine stock was being supplied to the state governments, private hospitals and the corporate sector. The manufacturers, which have been given liberty to decide the price, have quoted Rs 300 per dose of Covishield for the government supplies and Rs 600 for private sector, while Covaxin dose is priced at Rs 400 for government and Rs 1,200 for private facilities.

Jab only at govt centres