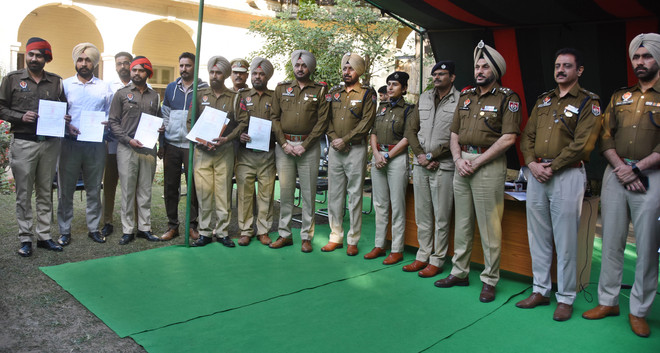 Commissioner of Police Gurpreet Singh Bhullar, JCP J Elanchezhian, JCP SPS Dhindsa and ADCP Jagatpreet Singh, while addressing mediapersons said a robbery had taken place at the shop of money exchanger in the Focal point area on November 15. The robbers had snatched Rs 5.80 lakh from Amrita Nanda and her daughter Bartika when the duo were about to close the shop.

The robbers while committing the crime had injured Amrita with a gunshot whereas Bartika had also sustained an injury from a sharp weapon. The CP said investigating the case on the basis of human intelligence and technological support, the city police cracked the case. The police arrested Bobby, a resident of Sidhuwala village in Patiala district, Salinder Mishra of Lakhimpur Khiri in Uttar Pradesh and Sunil Kumar of Madhubani in Bihar.

Bhullar said Sunil Kumar had done the planning and recce of the shop after which the crime was done. The country-made pistol used for the crime was purchased by Bobby from Uttar Pradesh for Rs 10,000. The police have recovered the weapon, along with two motorcycles, one of which was stolen and other was snatched, five cartridges, Rs 1.05 lakh, laptop, bag and three ATM cards from them.

He also mentioned that several cases had already been registered against the accused. The police has also lodged an FIR against Ashok Masih, a resident of Model Town, Ludhiana, and Ashok Kumar of the Giaspura area, who used to purchase stolen goods from the gang. The police recovered 19 new mobile phones, two LCDs and two home theatres from the accused.