After Mar, a penalty of Rs10 lakh per drain per month will be levied: Panel 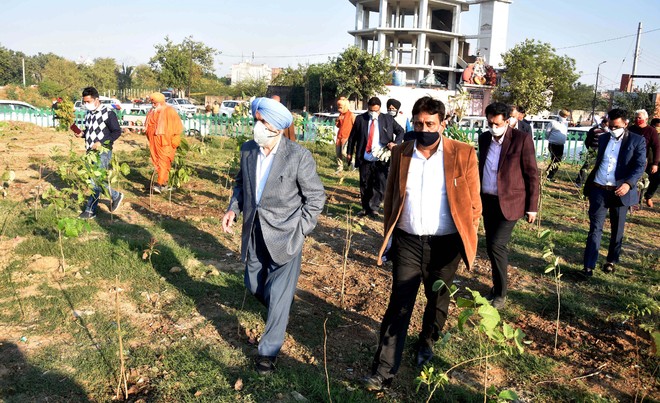 A team of the NGT Monitoring Committee checks a micro-forest area along the Buddha Nullah in Ludhiana. Photo: Ashwani Dhiman

The monitoring committee of the National Green Tribunal (NGT) visited Ludhiana to check the status of the works related to the cleaning of Buddha Nullah and solid waste management today.

Justice Jasbir Singh has given directions to the MC authorities to ensure 100 per cent treatment of sewage by upgrading the sewage treatment plants (STPs) to the required capacity so that no untreated water shall be drained into the Buddha Nullah by March 31, 2021. He said according to the NGT orders, if the district did not start the STPs before March 31, 2021, a penalty of Rs 10 lakh per drain per month would be levied. He also told the district authorities to commence the work related to in-situ remediation before July 1, 2021.

During the visit, the NGT panel hailed some initiatives by the MC and the PPCB. Justice Jasbir Singh said the committee appreciated the initiatives, including the setting up of Modern Animal Carcasses Processing Plant, Modern Slaughter House, common effluent treatment plants (CETPs) for textile dyeing industries and micro-forests in the district. The carcasses plant is being set up under the smart city mission, while the MC has taken an initiative for setting up micro-forests along Buddha Nullah.

MC chief Pardeep Kumar Sabharwal said they had set up 10 micro-forests and more such forests would be set up in the coming months. The panel was also informed about the MC’s plan for the beautification of Buddha Nullah.

According to information, the panel has given instructions to the authorities concerned to make sure the functioning of the carcass utilisation plant, slaughterhouse and the CETPs on time, otherwise penalty would be imposed. The panel members also appealed to the public to practise the source segregation of the waste.

Justice Jasbir Singh appreciated the efforts of the SPV and Punjab Pollution Control Board for setting up the project. He directed the SPV of Focal Point and Tajpur Road dyeing cluster to commission their respective CETPs by December 31 and use their treated effluents onto land for irrigation so as to completely segregate the industrial and domestic effluents of the city.