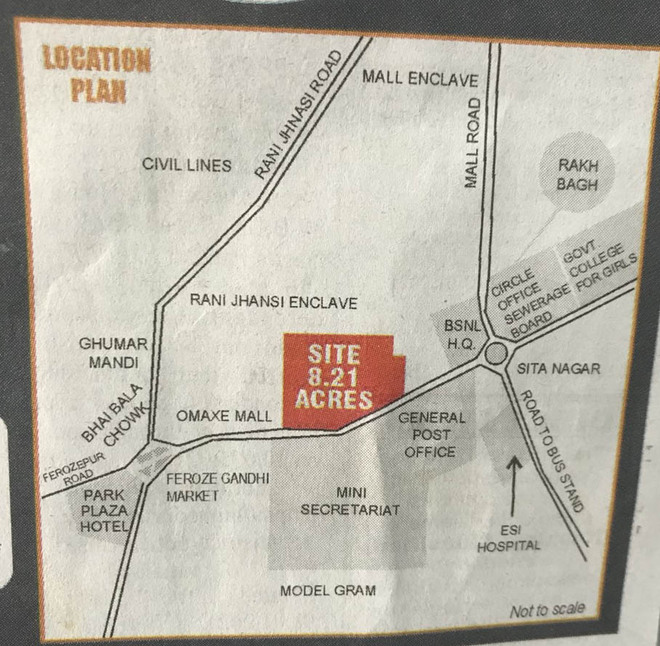 Location plan of 8.21 acre land being offered for sale by PUDA in Ludhiana Tribune photo

The move by the Punjab Urban Planning and Development Authority (PUDA) to put under e-auction for sale 8.21-acre chunk of prime commercial land right in front of the Mini-Secretariat on Ferozepur Road (a national highway) for the fifth time (after four unsuccessful attempts) is being taken as a brazen step, given the slump in the real estate sector and the Covid effect on the overall economy of the state.

The process of the e-auction for the sale of this chunk of land would land with a reserve price tag of Rs333.79 crore and commence on February 4 at 9 am and conclude on February 15 at 1pm.

The land belonging to the Canal/Irrigation Department was got vacated some eight years ago and handed over to PUDA for commercial exploitation under optimum use of vacant government land (OUVGL). Between 2014-17, the chunk of the land was offered for sale thrice at a reserve price of Rs415.21 crore.

Process to commence on feb 4

The process of the e-auction for the sale of 8.21-acre chunk of prime commercial land right in front of the Mini-Secretariat on Ferozepur Road would land with a reserve price tag of Rs333.79 crore and commence on February 4 at 9 am and conclude on February 15 at 1pm.

However, with no buyer coming forward even once, the floor price of the land was slashed by 20 per cent as per the prevailing government policy and was again put up for sale through e-auction at a reserve price of Rs333.79 crore in December 2018 without success.

It would have been a history of sorts if the 8.21-acre chunk of land offered for sale by PUDA for commercial or group housing purpose was taken – even though at a slashed price, both in terms of area and the reserve price for a single property sold under the OUVGL at least in the business hub if not in the entire state.

As per the offer document, the chunk of land (measuring 33334.69 sq m) is being offered at the rate of Rs 1,00,463 per sq m and the eligibility fee has been fixed at Rs6.68 crore. The maximum permitted ground coverage would be 45 per cent and unlimited floor area ratio (FAR), unrestricted height – subject to clearance from the Airports Authority of India and the fulfillment of norms such as setbacks around building, ground coverage, FAR, structural safety and fire safety.

Further, it would be mandatory for the builder to provide two equivalent car space (ECS) as parking area per 100 sq m of the total covered area. The successful bidder would be given the possession of the land on 20 per cent payment and on lump sum payment of the balance amount at a discount of 7.5 per cent, says the offer document.