It was conveyed that tickets for the cancelled scheme could be encashed from stockists, sellers & post offices 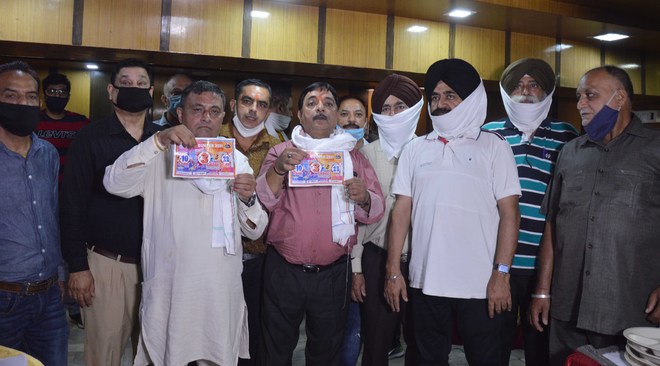 Members of the Northern India Lottery Association at an emergency meeting in Ludhiana on Wednesday. Photo: Inderjeet Verma

Dealers alleged that the government had still not given back the refund for Baisakhi Bumper to them. They said due to the Covid-19, Baisakhi Bumper was cancelled and it was conveyed that tickets could be encashed from stockists, sellers and post offices. But till date, nothing was done and people were making rounds of offices to get their money back. Dealers said nine lakh lottery tickets worth over Rs 22 crore were sold.

The association president, HK Chugh, said, “If the state Lottery Department will not honor the return of these tickets then who else will take the responsibility?”

“We have given an easy option of exchange of Baisakhi Bumper tickets with Rakhi Bumper, which is not acceptable to the Directorate of Punjab State Lotteries for the reasons best known to them,” Chugh added.

Punjab State Lotteries Department had appointed three SSAs in 2003 for the sale of paper lottery on internet. The department on submission of minor bank guarantees from all these sole selling agents (SSAs) authorised them to install computer sets for stockiest and sellers in Punjab for the sale of lotteries. Almost 4,000 computer sets were installed by each SSA and Rs120 crore was collected from dealers.

The Punjab State Lotteries Department has been running four to six bumper lotteries in a year. The department has announced that the first prizes of schemes would be declared amongst sold tickets. There was no deduction except 30 per cent TDS from prizes above Rs10,000, the department added.

In a Diwali Bumper draw held last year, two first prizes of Rs2.50 crore were declared in the scheme. An amount of 20 per cent was deducted from the first prizes other than TDS. To whom this amount of Rs 1 crore was distributed without any approval is best known to the Lottery Department.

“Another interesting fact is that if first prizes can be declared from sold tickets then why not second, third, and fourth prizes?,” Chug said while adding that the SSAs collected service tax from dealers on sales of Rs8 to Rs9 crore daily, which was not deposited with the department nor returned to dealers.

“This amount runs into crores while the Department of Lotteries prefers to look other way,” alleged members of the Northern India Lottery Association.