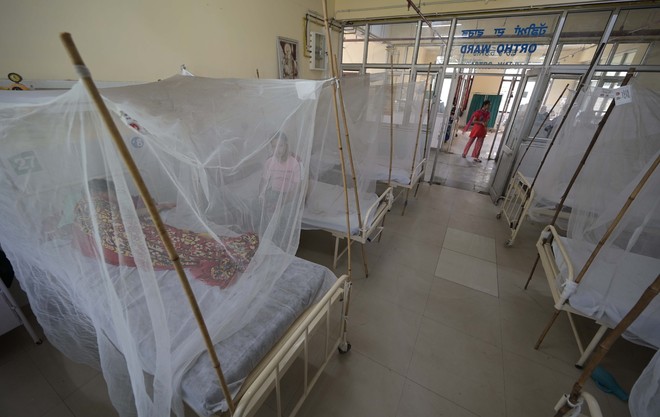 The dengue ward at the Civil Hospital in Ludhiana. Tribune photo: Himanshu Mahajan

After Covid, now dengue is keeping the Health Department on its toes. Now only eight patients are undergoing treatment for Covid in various hospitals in the district but more than 100 dengue patients have occupied beds in city hospitals.

Presently more than 100 patients are undergoing treatment for dengue at city hospitals. Be it private or government hospitals, wards and rooms are full and patients are making rounds to get hospital beds.

Sudhir Kumar, a relative of a patient, said his maternal uncle was suffering from dengue and since his platelet count dropped down drastically, they took him to hospital.

“He was admitted to the emergency ward and for two days given immediate care but could not get a room in the hospital. All the private rooms in the hospital were full,” he said.

Senior Medical Officer of the Civil HospitalDr Amarjeet Kaur said they have 11-bedded dengue ward but it is usually full due to rush of patients. Now seeing the rush of patients, the trauma ward has been converted into the dengue ward.

“If patients are made to share beds that means we are not making any patient go back and attending to everyone. Even our staff members are doing double work as they are attending to two patients on a single bed. We are trying to provide treatment to every patient coming to us,” said the SMO.