A thought for the balloon boy 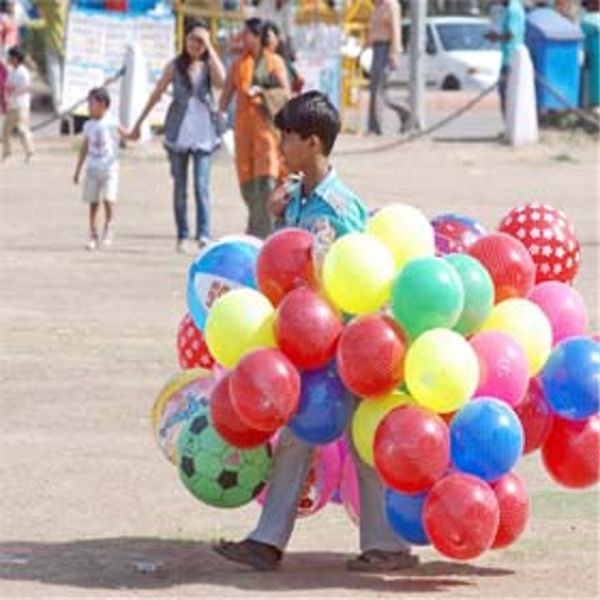 OURS is a country where one child sells balloons and the other buys them. This disparity not only pains a Nobel laureate like Kailash Satyarthi, who works for child rights, but also all sensitive souls who believe that ‘the child is father of the man’ and this clay needs to be moulded in such a manner that it becomes a pillar of a nation’s progress.

When every morning, in a mad scramble, I rush to my college to deliver my first lecture, I happen to exchange glances with a boy of barely 10. He evokes a sense of bewilderment with his enigmatic smile, standing barefooted, shabbily clad with a bunch of balloons in his weather-beaten tiny hands. His furrowed face impels me to draw a comparison with those kids who pass by him in their school vans, attired in multi-coloured dresses, and the kids who wait for me in the class. Though in a hurry, I slow down my car and buy a balloon from him, not to please the kids at home, but just to supplement his income with my meagre contribution.

When I drive ahead while negotiating the rough and tumble of city roads, I am pulled back towards the site where the childhood of our country is getting recklessly ruined in front of civilised people who have put blinkers on their eyes. I am grimly reminded of all those children who instead of savouring school life must be trudging from one place to another with balloons to sell them to their privileged peers. Much to my dismay, a balloon is a source of bread and butter for one child and fun and flutter for the other. It is not only the heart-rending pictures that I visualise, but also the shrieks of William Blake’s little black boy, as if, like in the poem, my balloon boy also screams: ‘White as an angel is the English child, but I am black as if bereav’d of light.’

Wrapped in the thoughts of a world of lost innocence, I make it to the class almost on time. As usual, the students are not in a mood to study and unusually I, too, find myself not in a mood to teach because I am engrossed in mourning the fact that all children are not going to school. That day remains a distant dream for many of them. Whether I make any significant contribution by buying a balloon from the child or is it a mere ploy to lull one’s conscience is the question that haunts me all day long.