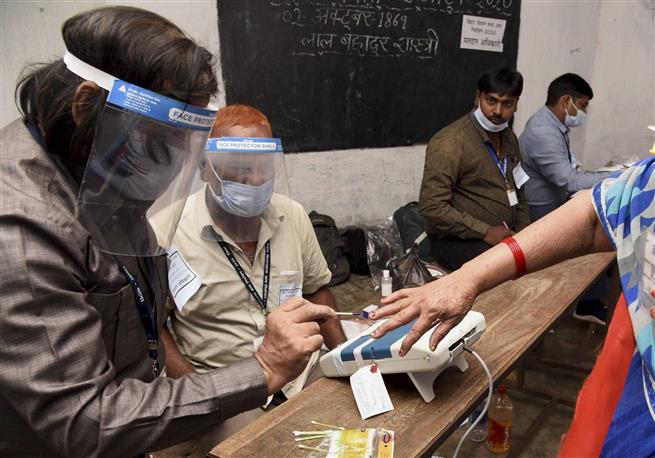 Polling officials apply indelible ink to an elderly voter before casting her vote during the first phase Bihar assembly polls, amid the ongoing coronavirus pandemic, at Paligang in Patna district, on Wednesday, October 28, 2020. PTI

Chief Election Commissioner Sunil Arora on Wednesday said the Election Commission was “discouraged” from holding the Bihar assembly polls amid the COVID-19 pandemic, but the poll panel was of the view that carrying out the electoral exercise was a “leap of faith and not a leap in the dark”.

In a break from the past, the CEC attended the poll panel briefing here on voter turnout in the first phase of the Bihar Assembly elections held on Wednesday. Usually, the briefing is held by the deputy election commissioners concerned.

In his opening remarks, Arora said, “We (EC) were, in a way I would say, were also discouraged as to why elections are being held amid Covid. But you would recall I had said on September 25 (when Bihar poll schedule was announced) that for EC, this poll is a leap of faith and not leap in the dark.”

He, however, did not say who had discouraged the poll watchdog. Some opposition parties had urged the poll panel to postpone the elections due to the pandemic.

Arora said the voter turnout in phase one of the Bihar assembly elections was 52.24 per cent till 5 pm. Another senior poll panel official later said the “projected” turnout was expected to be more than that in the 2015 assembly polls and the Lok Sabha elections.

He said of the 16 districts which went to polls in this phase, 12 were left-wing extremism (LWE) affected.

“Out of the 12, four are considered as extreme left-wing affected,” he said, while expressing happiness at the smooth conduct of the polling exercise. Based on the terrain and inputs provided by the district authorities, poll timings were shorter in the LWE districts.

Election Commission Secretary General Umesh Sinha told reporters that the “projected” voter turnout was expected to be more than the last assembly and Lok Sabha polls.

A total of 71 assembly constituencies of Bihar went to polls on Wednesday in the first of the three-phase elections amid tight security and with COVID-19 guidelines in place.

Polling began at 7 am and ended at 6 pm. The poll timing was increased by an hour to allow those having temperature and those tested positive for coronavirus cast their vote in the last hour.

Of the nearly 2.15 crore electorate eligible to exercise their franchise, 1.12 crore are male, 1.01 crore female and 599 are categorised as third gender, according to data provided by the Election Commission.

In 12 polling stations of Jamui, the poll timing was increased by one hour due to delay in replacing the faulty machines, he said.

One control unit and at least one ballot unit makes for one EVM.