PM must come out of A/C cars to feel pain of common man: Robert Vadra on fuel price hike 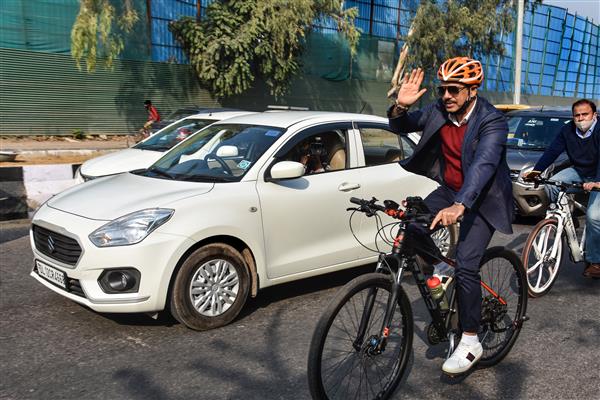 Businessman Robert Vadra rides a bicycle on his way to his office during a protest against the hike in fuel price, in New Delhi. PTI

“You (PM) must come out from A/C cars and see how people are suffering and perhaps then you would reduce fuel prices. All he does is blame other previous governments for everything and move on,” Vadra said while speaking to ANI.

“For everything Prime Minister Modi blames United Progressive Alliance (UPA) and the previous government. If something goes wrong then my name will be raised. He always blames others and keeps going,” he added.

“What Congress leader Rahul Gandhi said was right that they (BJP) only think about two people,” he added.

“To feel the problem and pain of common people one has to come on the road,” he added.

“If I have to be people’s voice then first I have to ride a bicycle to feel their pain then only I can make their voice strong. We can only request the prime minister to look into the matter,” Vadra added.

Asserting that Congress interim president Sonia Gandhi has written a letter to PM Modi and demanded to reduce fuel prices, he said: “Already because of COVID-19 people are in trouble, and facing this inflation. They are not able to live properly. The government will have to understand their problem.”

Vadra rode a bicycle from his Sujan Singh Park residence to his Sukhdev Vihar office in protest against the rising fuel prices.

Congress interim president Sonia Gandhi on Sunday wrote a letter to Prime Minister Narendra Modi to convey “every citizen’s anguish and deep distress regarding the spiralling fuel and gas prices”.

Citing the COVID-19 pandemic, the Congress chief had in the letter alleged that in distressing time, the Central government is making a profit from people’s misery and suffering.

She termed the rise in fuel prices as “short of extortion to cover up economic mismanagement” and urged the prime minister to follow ‘Raj Dharma’ and reduce fuel prices by partially rolling back excise duty. — ANI