‘No arms sale to Pak; Quad should be more inclusive, open-minded’ 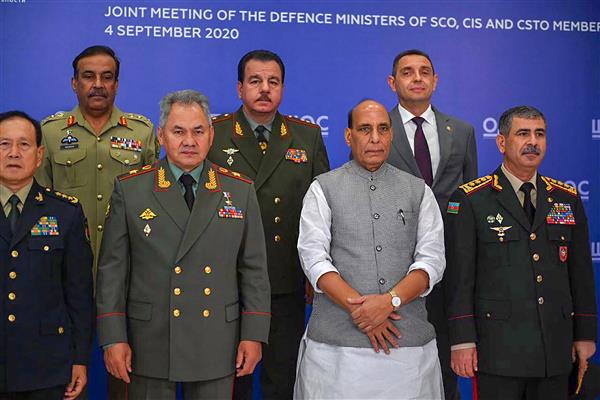 Defence Minister Rajnath Singh poses for a group photograph during the Joint Meeting of the Heads of Defence Ministers of SCO, CIS and CSTO members, in Moscow. PTI file

Russia is hopeful Shanghai Cooperation Organisation (SCO) can become a catalyst for its two recent members, India and Pakistan, to initiate direct talks after a long spell of estrangement.

India and Pakistan had recently joined the SCO whose original members are Russia, China and four Central Asian countries. On the margins of the last meeting of SCO Defence Ministers, Rajnath Singh discussed the border tensions with his Chinese counterpart. The threads will be picked up by External Affairs Minister S Jaishankar who will meet his Chinese counterpart Wang Yi on the sidelines of SCO Council of Foreign Ministers.

Encouraged by this trend, Deputy Chief of Mission in the Russian Embassy Roman Babushkin on Tuesday hoped that India and Pakistan may follow suit. The Russian reasoning was that after India and Pakistan have worked together in SCO on common issues, they could build enough trust to enter into bilateral talks on its sidelines.

“The important thing about SCO is this is quite a comfortable platform for expanding cooperation on common ground in order to build mutual trust and eventually create conditions for expanding the dialogue,” explained Babushkin.

However, the Russian envoy made it clear that despite Pakistan’s membership of SCO which has led to closer working ties with Moscow, there will be no arms sale to Islamabad. Russia has decided not to enter into an arms relationship with Pakistan at the request of the Indian side, said Babushkin.

The envoy was hopeful of India and Russia signing a logistics sharing agreement (LSA) that will give their security forces access to each other’s military bases. India already has a LSA with the US and is negotiating similar pacts with France and Japan. He also said military equipment ordered by India such as S-400 and Mig-29 and Sukhoi-30 aircraft will be delivered as per schedule.

Russia was comfortable with India becoming a member of the Quad, said Babushkin but pointed out that to be a regional body, it must be more inclusive, open minded and based on the principle of undivided security rather than a “mysterious rules based order”.

“We do not accept any attempts to create further alienation in the region by the philosophy of restricted security blocs and forced changes in supply chains. It will lead to more mistrust and take Indo-Pacific away from consensus,” he observed.