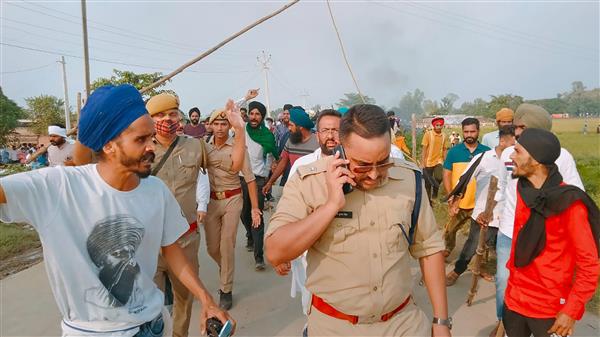 Over 50 farmers have been summoned by the Special Investigation Team (SIT) in connection with an FIR on the alleged lynching of three BJP workers during the violence that broke out in Lakhimpur Kheri on October 3.

Fifteen farmers appeared before the SIT on Monday to record their statements in the alleged lynching case after notices were issued to them under sections of the Code Of Criminal Procedure (CrPC).

An SIT official said, "We have been investigating both the FIRs and the farmers were summoned in connection to the second FIR." Every farmer was questioned for over 15 minutes in the presence of their advocate Mohammed Amaan, sources said.

Jasbir Singh Virk, president of Bhartiya Sikh Sangathan told reporters that of the 15 farmers who appeared before the SIT, only 11 recorded their statement.

"The SIT asked questions related to the incident and the same statement was recorded for both the FIRs. They were asked questions such as how did they realise they were in danger and what did they do after farmers were mowed down. We have told the SIT members that farmers will cooperate with them," he said.

The SIT, on Monday, had also arrested four aides of Union Minister of State for Home Ajay Misra's son Ashish. The accused include Sumit Jaiswal, who got the cross FIR lodged against the farmers. He had been absconding after their convoy allegedly mowed down four farmers and a journalist.

In a video that went viral, purportedly from the Lakhimpur Kheri violence, Jaiswal, in a blue kurta, was seen coming out of the Thar, the SUV that ran farmers over. He gave multiple interviews to news channels thereafter. The day the SIT was formed, he suddenly went missing.

Jaiswal is a BJP worker and a ward member from Lakhimpur city. A total of 10 arrests have been made by the SIT in the case.

Special prosecution officer S.P. Yadav said the four accused will be produced in front of a remand magistrate on Tuesday since the regular court will be closed on account of a holiday. "SIT is questioning the accused and may seek remand custody if needed," he said.