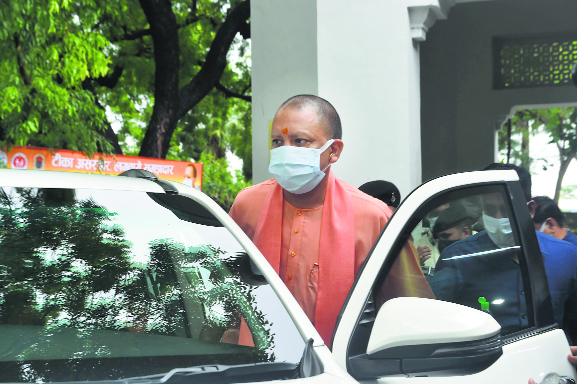 After reports of the BJP cutting Chief Minister Yogi Adityanath to size during his recent visit to Delhi, the power corridors in Lucknow are again abuzz, this time with speculations about dividing Uttar Pradesh into smaller states.

In November 2011 when BSP supremo Mayawati was the CM, the Uttar Pradesh Assembly had passed a resolution favouring the division of the state into Bundelkhand (7 districts), Purvanchal (21), Awadh Pradesh (21) and Paschim Pradesh (26).

Though Adityanath had on an earlier occasion rejected any such plan to divide the state, maintaining his government believed in “uniting, not dividing”, the buzz is a message on similar lines was conveyed to him by the BJP leadership during his recent two-day visit to Delhi.

While Mayawati’s proposal was then dismissed by most parties, including the BJP, as a “political gimmick”, the saffron party is now learnt to be in favour of smaller states as these were “easier to govern”. Incidentally, the late Ajit Singh of the Rashtriya Lok Dal was also in favour of carving out ‘Harit Pradesh’ in western UP, the current hub of farm politics.

Whether such an exercise was possible, or plausible, remains to be seen, the speculation has also stemmed from reports of alleged differences between Prime Minister Narendra Modi and Adityanath over various issues. The decision to divide UP is being seen as a way to “limit” Adityanath to Purvanchal, his key support region.

Apparently, the central leadership is upset over the manner the CM has been managing the BJP’s affairs in the state and the way he has been doing his public outreach “without giving due prominence to the PM”.

Much was read into the PM not wishing Adityanath publicly on his birthday a couple of days ago, the colour of ‘kurta’ (green) that Home Minister Amit Shah wore when the CM called on him in Delhi and a relatively under-toned or muted response by senior leaders to his Delhi visit.