From use of digital screens to women artistes on stage, Ramlila sees sea change : The Tribune India 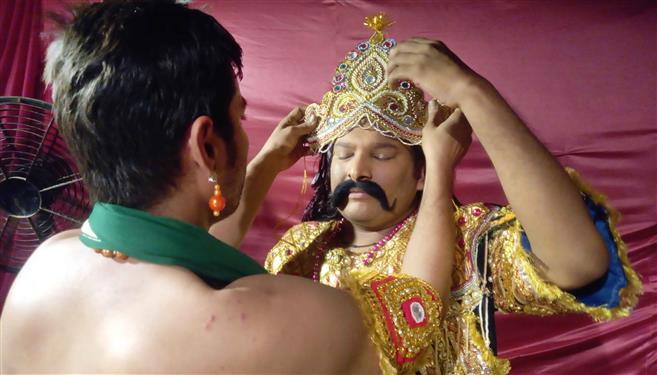 An artiste gets ready ahead of Ramlila performance in Patiala on Tuesday. Rajesh Sachar

It is an annual custom for many in the city to participate in Ramlila, which culminates with the burning of Ravan’s effigy on Dasehra to mark victory of good over evil.

Over the years, traditional Ramlila has been making way for use of new-age technology and changes in dialogue delivery. Once considered the domain of males, the event has started seeing participation by women.

Earlier, we used curtains to present settings. It used to be tiresome. Now, we do it with help of digital screens and lapel microphones, allowing performers to deliver dialogues. Ashish Kaushal, Ramlila Director

The nine-day performance commences on the first Navratra. It takes more than 100 stage artistes, background and management staff and directors, who train and rehearse for nearly two months, to make it all happen.

Performances at Jorian Bhathian Chowk, Ragho Majra grounds and DMW have been drawing audiences from across the city over the years.

Organisers say enactment has undergone a sea change over the years. Varun Jindal, who has been essaying the role of Bhagwan Parshuram at Jorian Bhathian, says: “The time spent in enactment has changed over the years. We were the first to introduce women’s participation in 2015. Earlier, women’s roles were played by men.”

Director Ashish Kaushal, who did his PhD thesis on Ramlila, says use of dialogues has also undergone change. “Earlier, we used poems and sayings that were difficult to comprehend for the common folk. We have switched to content and delivery that is easier to understand.”

“Earlier, we used curtains to present different settings. It used to be tiresome. Now, we do that with the help of digital screens and lapel microphones, allowing performers to deliver dialogues,” he says.

But the use of technology has also increased the expenditure. Organisers say they spend nearly two months collecting funds from their own pockets and general public.

“While some contribute with money, others pay in kind, such as offering services. The management has become costly, as the background digital screen to depict settings costs Rs 10,000 per day,” adds Jindal.

Daksh, another actor who is otherwise a swimming coach, says he is driven by faith. “I have been participating in Ramlila since 2015. We spend over two months training and rehearsing for the event. Funds are raised through donors or collections from residents.”

The two-hour stage performance every night involves breaks at regular intervals, explaining scenes, introducing dignitaries and chanting of ‘Jai Shri Ram’ slogans before they call it the day.