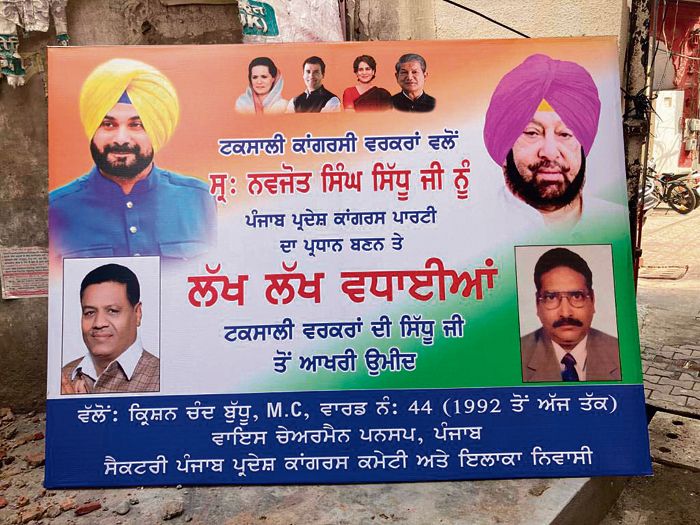 The rift among local Congress leaders in the Chief Minister’s own constituency and hometown is now out in the open as councillors have started levelling allegations against each other.

The Congress had won 59 of 60 seats in the Municipal Corporation (MC) elections, but differences surfaced among leaders after former minister Navjot Singh Sidhu was made the PCC chief. As such, posters congratulating Sidhu for becoming PCC chief have also been displayed in the city by Krishan Chand.

The Ward No. 44 councillor, Krishan Chand, had levelled allegations of corruption against Mayor Sanjeev Kumar Sharma recently. He issued statements against local Member Parliament Preneet Kaur and her daughter Jai Inder Kaur too. This did not go down well with local Congress leaders.

While levelling fresh allegations against Joshi and Duggal, Krishan Chand stated that they were involved in illegal activities and had taken advantage of their positions.

While talking to The Tribune Krishan Chand alleged that Joshi had constructed shops in violation of the MC building laws. Duggal was attached with a construction firm, “which used low-quality material for construction works in Patiala and caused losses to the state government”, Chand added. He would complain to the Vigilance Department regarding the two matters, said Chand.

Meanwhile, Joshi and Duggal rejected the allegations. Joshi said he did not know about illegal activities regarding which allegations were levelled against him and welcomed any inquiry.

Duggal said, “A relative of mine owns the construction firm and my brother is a partner in it. I have no involvement in the firm. They have been working in the city for long time.” The leaders alleged that Krishan Chand was acting as an agent of the opposition parties and issuing statements against Congress leaders before Assembly elections due next year.