The club had held a function violating corona guidelines 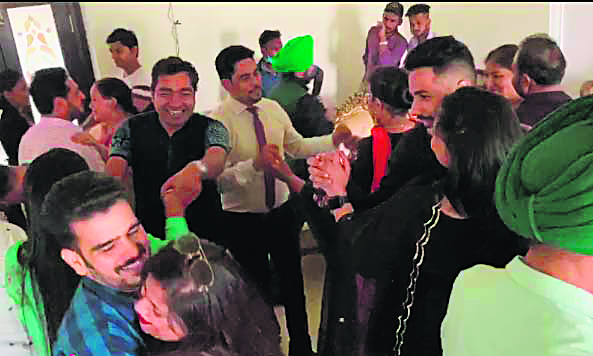 Guests, including children, were allegedly seen dancing without wearing a mask at the party. Tribune photo

A day after The Tribune reported on a private function held at Rajindra Gymkhana and Mahendra Club (Maharani Club), the district police registered an FIR against the host, guests and the management of the club “for violating COVID 19 related guidelines”.

Following a preliminary probe, an FIR under sections 269, 270, 271, 188 of the IPC; Section 51 of the Disaster Management Act; and Section 3 of the Epidemic Act 2020 was registered at Lahori Gate police station against host of the function Bhupinder Singh, unknown persons present at the function and the management of Maharani Club.

Police said following the video and some news items flashed in print media, the FIR was registered.

“Prima-facie it was found that above-mentioned persons organised a function at Rajindra gymkhana and Mahindra club where guidelines related to COVID-19, issued by the district administration, were flouted,” said Patiala SSP Vikramjeet Duggal.

Police said a thorough investigation of the incident will be carried out. “Last week, over 20 persons in the club were found corona positive and ideally such an even should not have happened against the government norms. We will see how many more such functions were held during the lockdown and add them to the case,” said a senior official.

According to the information gathered by The Tribune, a private member of the club had booked two rooms claiming that he would invite a total of around 30 guests. However, a video of the function shows that not only couple dance was held but elderly and children at the private function, held as part of a herbal company were seen without masks.

Interestingly, even the staff and waiters of the Maharani Club were seen serving without masks on. “How can such parties be allowed, when the gatherings are limited for marriages and deaths. Such gatherings are illegal and in addition to the management of the club a case should be registered against the host and staff, catering at the venue,” said a club member.

Patiala is already performing badly to contain the virus spread with hundreds of fresh cases in the past two weeks. Earlier such parties in Rajpura had led to community transmission following which government had banned all such avoidable functions. As per government guidelines, only marriage and death related gatherings that too limited to less than 30 persons with social distancing norms are allowed.

Interestingly, president of the club JPS Walia is also a doctor and he had claimed that he would examine the matter and had allowed two rooms be booked for a lunch with 15 guests in each room.

Following queries by The Tribune, Patiala SSP Vikram Jeet Duggal had marked an enquiry into the whole incident to the Patiala SP City following which the FIR has been registered.

The club is one of north India’s oldest clubs with hundreds of people from across the country as its members. “However, it has lost sheen in the past few years due to many violations and even the way its management holds elections,” rue members.