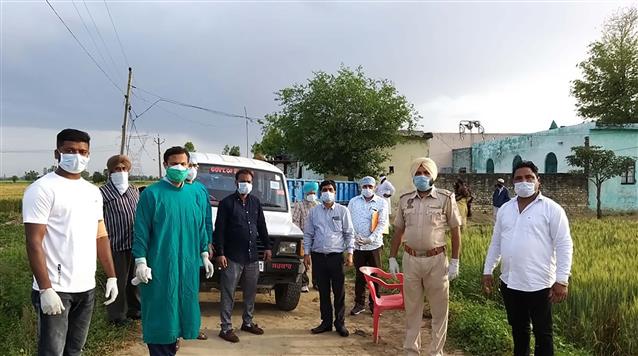 Test results of a 78-year-old woman who died in Mohali on Tuesday confirmed she had the virus.

The latest death takes the state's death count to 11.

Dr Manjit Singh, Civil Surgeon, said that the Mohali woman suffered from diabetes and hypertension. After her death, her samples were taken and sent to PGIMER in Chandigarh for testing as a precautionary measure.

Girish Dayalan, Deputy Commissioner, said that the co-morbid patient was brought to the emergency ward of a hospital in Kharar on April 6 and died the next day. According to Dayalan, her body has been cremated as per protocol. All primary contacts of the deceased woman have been traced and their samples sent for testing, he added.

Ten more positive cases were reported in Jawharpur, Derabassi---an area authorities have sealed off and are streating as a coronavirus cluster.

All 10 have been isolated. The number includes a 6-month-old baby boy. All 10 are family members of the village panch and sarpanch who tested positive in the village

After the village became a disease hotspot, Mohali district administration had sealed off the village along with some others as part of its cluster containment strategy.

The total coronavirus tally stands in the village is now 32.

Pathankot reported eight new cases, and Jalandhar and Sangrur reported one each.

After Dera Bassi and Banga, Pathankot appeared to have emerged as a new hotspot for coronavirus in Punjab. Pathankot reported eight new cases on Friday, taking the total number of cases in the district to 15.

Seven of the eight new cases are from the family of a 75-year-old woman from Sujanpur who died a hospital in Amritsar a few days ago.

The eighth case, a woman who earns her living as a domestic help, is unconnected, sparking fears of the possibility of community spread, authorities said.

The development came a day after his 47-year-old father also tested positive after he complained of breathing problems.

In Sangrur, news that a 55-year-old man who tested positive for coronavirus on Thursday had travelled to various villages and mosques in the district as part of a pilgrimage led to district health authorities scrambling to find everyone he came in contact with, authorities said.

The man who is from New Delhi came to Malerkotla by train on March 4.

A 27-year-old woman migrant labourer died in Kharar on Friday. It is suspected that she had coronavirus. Papoo Colony in Kharar has been sealed.

Meanwhile, the Gram Panchayat in Ropar has announced that if a death takes place in the district due to coronavirus, the body could be cremated at the Ghanauli Shamsham Ghat.

The gram panchayat of vill Ghanauli (Ropar) has taken a great decision & passed a resolution that if any death takes place in the district due to #Covid19, the cremation could be done in Ghanauli Shamshan Ghat. Thanks to the young dynamic educated Sarpanch & whole panchayat. pic.twitter.com/eidqlTXH7p

Highest number of cases in Mohali

Mohali district continues to have the highest number of cases at 48.

Mohali also reported the most cases on Friday at 11.

The state's evening bulletin said of the 3,461 who have been tested so far, tests of 2,972 came back negative.

The state's awaiting results for 338 patients and has 120 active cases. Twenty patients have so far been cured. Two people are in serious condition, the bulletin says.

Police sources said the 20 have been tracked down to Ludhiana’s Raikot and that their swabs have been sent for testing.

Four other people who attended the event from the district are already at a government quarantine centre in Delhi.