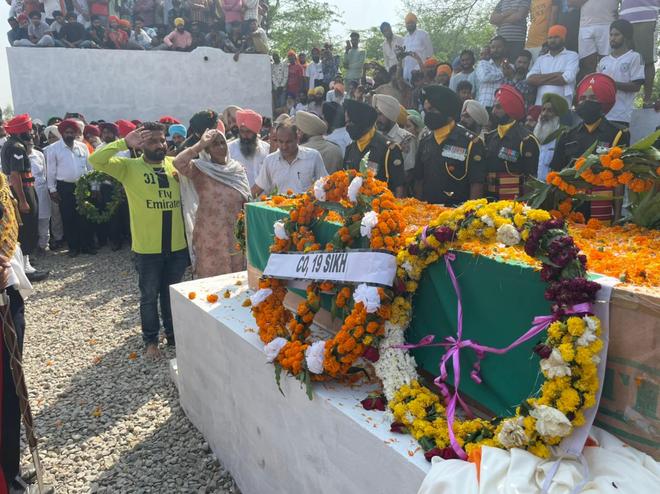 Naik Mandeep Singh’s body was cremated with full state honours at his native village Chatha on Wednesday. Hundreds of people turned up to pay their last respects to the martyr, killed in a militant attack in Poonch.

His mother, Manjit Kaur, was inconsolable, and so were the soldier’s wife and brothers. But when the moment arrived to take her son’s body on its last journey, the mother jumped the queue and was one among the pallbearers. Later, she saluted the body before it was consigned to the flames.

A contingent of the 19th Sikh reversed arms and fired shots in the air as a mark of respect.

His wife, Mandeep Kaur, tried to put up a brave face while speaking about the future of her sons— Mantaj (4) and 38-days-old Gurkirat.

The Army also handed over a T-shirt inscribed with ‘Mandy-22’ to the family. Mandeep used to wear it while playing football for his unit. His colleagues said he was good at both football and basketball and had brought many laurels to his unit.

The Punjab Government was represented by Cabinet minister Tript Rajinder Singh Bajwa while DC Mohammad Ishfaq laid wreaths on behalf of the Lok Sabha Speaker and the Governor. Deputy CM Sukhjinder Singh Randhawa, who hails from Gurdaspur, sent in a condolence message. — TNS