Puts up his resignation letter on Twitter; I told you so, says Amarinder 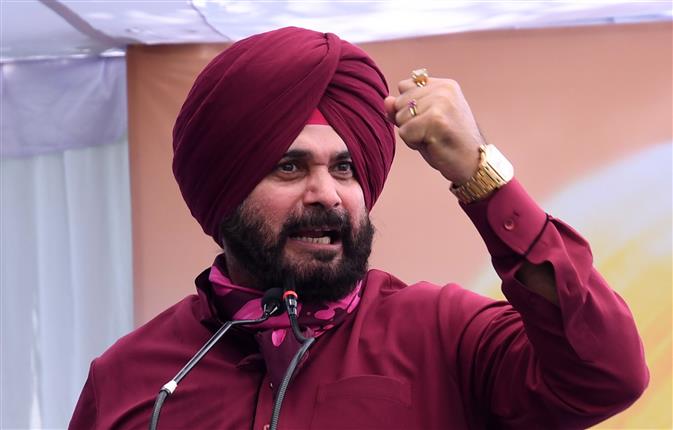 He put up his resignation letter addressed to Congress president Sonia Gandhi on Twitter.

"The collapse of a man's character stems from the compromise corner. | can never compromise on Punjab's future and the agenda for the welfare of Punjab," Sidhu's letter to Sonia Gandhi said.

"Therefore, I hereby resign as the President of Punjab Pradesh Congress Committee. Will continue to serve the Congress," he said.

Soon after this, Gulzar Inder Singh Chahal, who was made Treasurer of the Punjab Pradesh Congress Committee soon after Sidhu took over, also put in his papers, as did general secretary Yoginder Dhingra.

The second significant resignation however came from Punjab Minister Razia Sultana. Sultana, whose husband is Sidhu's chief strategic adviser, said she was resigning from the cabinet only hours after she was given water supply and sanitation, social security, women and child development, printing, and stationery departments.

Sidhu's resignation comes amid the furore over Deol's appointment. Deol, who has, among his various high-profile cases, represented Punjab's tainted ex-DGP, Sumedh Singh Saini, was appointed through an official notification on Monday. Chief Minister Charanjit Channi has tried to downplay the controversy saying the case was just another one taken up in the course of Deol's professional duties.

He's believed to be upset over the recent developments in the state—from the non-inclusion of some Members of Legislative Assembly in the recently-expanded cabinet of Chief Minister Charanjit Singh Channi and the appointment of Punjab's new Advocate General, Amar Preet Singh Deol.

Former chief minister Capt Amarinder Singh,  Sidhu's arch-rival, was among the first to react, with a cheeky: "I told you so".

"I told you so…he is not a stable man and not fit for the border state of Punjab," his tweet said.

Capt Amarinder Singh has had a long-running power tussle with Sidhu, who's generally been seen as vying for the position the former once held.  After he'd resigned, Amarinder had vowed to ensure Sidhu wouldn't become chief minister, calling him a friend of Pakistan and a security threat to the entire country.

Sidhu meanwhile has refused to talk to anyone, sources say, and is currently holed up at his Patiala residence with only close aides.

I told you so…he is not a stable man and not fit for the border state of punjab.

Chief Minister Channi told the press that he was unaware of the development.

Channi, whose press conference was held a short while after Sidhu’s announcement, said he would have to speak to Sidhu, whom he still “considered” Punjab Congress chief, before he commented on the development.

Inside track: What lead to Navjot Singh Sidhu's resignation

He said the party would talk to Sidhu.

“He is the party president. If he's upset, it will be settled," Channi said.

Bholnath Member of Legislative Assembly Sukhpal Khaira urged Sidhu to reconsider his decision. Khaira,  a Congressman who'd quit the party in a huff in 2015 to join the Aam Aadmi Party only to return to the Congress fold in June, also asked the party high-command to find solutions to the issues Sidhu raised.

Sidhu’s resignation comes hours after new ministers in Channi’s cabinet were given portfolios. It also came less than a week after  Capt Amarinder Singh resigned from the chief minister's position, spurring a change at the helm of the Congress government in Punjab.

Channi, who was chosen as Amarinder Singh's successor, would head the state government for a few months until the Punjab Assembly elections early next year.

It remains to be seen what effect the political turmoil within the Punjab Congress would have on the elections.

Complete and absolute state of anarchy in Punjab Congress. How can the people of Punjab expect these selfish leaders to give a stable, progressive and inclusive administration? How can these people be trusted with a state which has 550km border with Pakistan?

Complete and absolute state of anarchy in Punjab Congress. How can the people of Punjab expect these selfish leaders to give a stable, progressive and inclusive administration? How can these people be trusted with a state which has 550km border with Pakistan?