A day of demonstrations in Amritsar 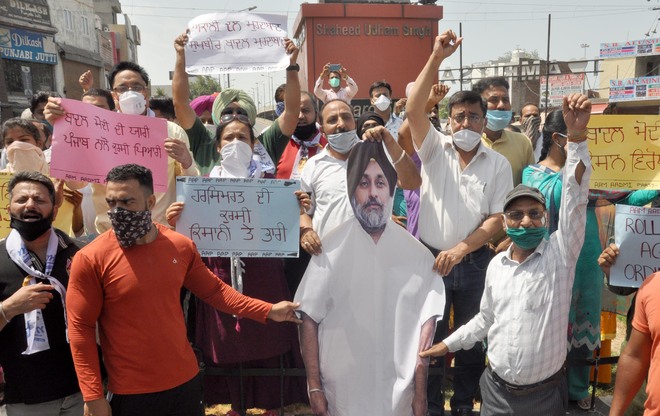 (From left) Members of the AAP protest against the SAD for endorsing the Union Government’s policies in Amritsar on Monday. Photo: sunil Kumar

Members of the AAP held protests in all five assembly segments of the city to protest against the SAD for endorsing the Central Government’s three ordinances pertaining to agriculture. They burnt the effigies of Sukhbir Singh Badal, President of SAD.

Ashok Talwar, President of AAP (Urban), said these ordinances had provisions to end the MSP and current market structure. He said Sukhbir Badal had opposed the all party meeting called by the state government to meet Prime Minister Narendra Modi over the issue. He claimed that MP Bhagwant Mann would bring private members’ bill against these ordinances in the next session of the Lok Sabha.

Rural pharmacists working under the Department of Panchayats burnt copies of their educational certificates as a mark of protest against the state government for not regularising their services.

They complained that they had been working on contractual basis for the past 14 years and were being paid paltry pay. Dheeraj Kalia, a rural pharmacist said, “We have been assigned Covid duties and have also been working as a part of the Rapid Response teams and for screening suspected patients at airports and others places. But we are astonished to know that we are not covered under the Rs 50 lakh insurance cover announced by state government to cover employees performing Covid-related duties.”

The employees stated that they enquired from senior officials of the administration and they have stated that the said insurance scheme does not cover rural pharmacists.

Rural Pharmacy Officers association leader Kamaljit Singh said most of the employees had not left their job despite their pay being very low. He said the rural pharmacists were being paid around Rs 10,000 per month.

Congress workers staged a protest against the Union Government for constantly raising prices of fossil fuels and burdening the common man.

Jatinder Sonia, president of the District Congress Committee (Urban), said the Modi Government was bent upon raising the prices of petrol and diesel daily in small proportion. She said this was being done despite there being no price escalation in crude in the international market. Members of the District Congress Committee raised slogans against the government and demanded withdrawal of hike. They said common people were the worst victims of the lockdown and instead of holding their hand in distress they were being burdened.