People should seek answers from the government who did nothing except making false promises during its five-year rule, said Manish Sisodia, Deputy Chief Minister of Delhi and senior AAP leader, who was here to campaign for former IG Kunwar Vijay Pratap Singh, AAP candidate from Amritsar North.

He said the enthusiasm among the people supporting AAP is an indication of enormous support which the party was getting among the public during this assembly polls. He said the problems being faced by the people are common in every region be it Malwa, Majha or Doaba.

“The people are suffering with rampant drug abuse, poverty, rising inflation and unemployment and unfortunately no traditional party is speaking on this issue. They were busying in mudslinging at each other,” Sisodia said.

“We had accepted the mandate given by people in 2017 but now is time for them to ask questions to the representatives of the government who are approaching them for seeking votes,” he added.

Answering queries regarding PPCC president Navjot Singh Sidhu’s statement terming the televote for declaring Bhagwant Mann as the CM face as fake, he said Sidhu’s party leaders were not getting any response and therefore he sees everything as fake.

On ED raid at Punjab Chief Minister Charanjit Singh Channi’s relative, he said the money recovered from the residence of his relative was tax payers’ money.

Dr Kunwar Vijay Pratap Singh, addressing the people said that former Chief Minister Capt Amarinder Singh had sweared on Gutka Sahib and promised to end drug abuse and provide employment to every house. However, neither of the two promises were fulfilled during five-year rule of the Congress government. 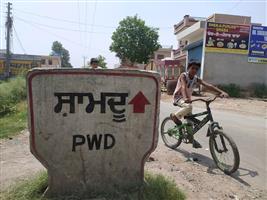