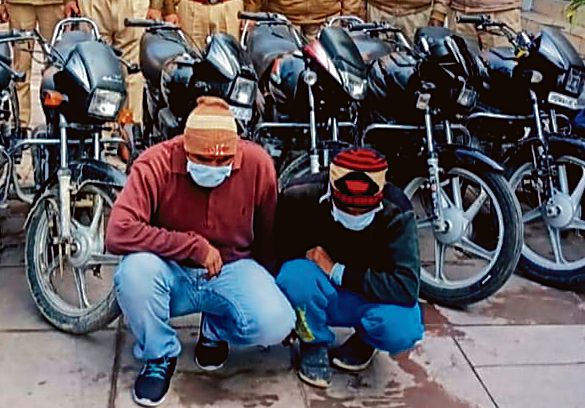 The Kotwali police have arrested two vehicle lifters and recovered seven bikes and a chassis of a motorcycle from them.

Amritsar: The Kotwali police have arrested two vehicle lifters and recovered seven bikes and a chassis of a motorcycle from them. They have been identified as Bikram Singh of Madan Lal Dhingra Colony and Jaspal Singh Kotla Duma village located on Ram Tirath Road here. According to the police, they used steal bikes from different parts of the city and later sold them after forging documents. A case has been registered against them and more recoveries are likely to be made during further investigations, the police said. TNS

Amritsar: Amritsar Central Jail authorities have seized six more mobile phones from some inmates during a search operation. According to jail officials, three mobile phones were found from Ranjodh Singh Jodha of Buraj Phulla in Harike, Jaspreet Singh of Pat Rai Khurd in Jhander and Smana of Basarke village in Khalra, while three cell phones were found unclaimed.