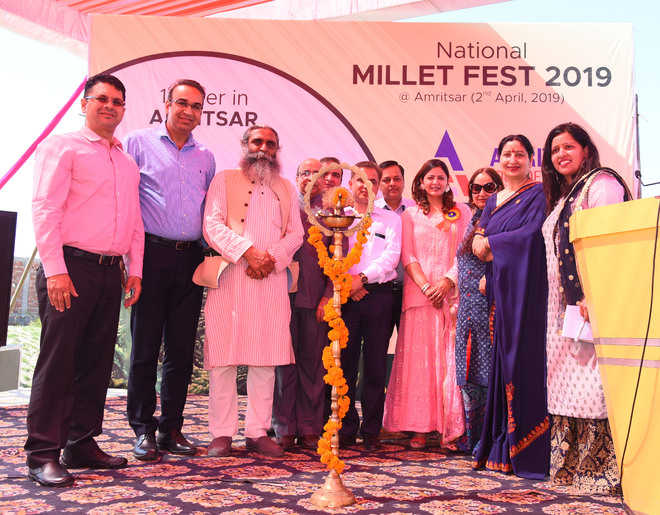 Dignitaries during National Millet-2019 organised by the Kheti Virasat Mission in Amritsar on Tuesday. Tribune photo

Amritsar Group of Colleges (AGC) in collaboration with the Kheti Virasat Mission organised Amritsar’s First National Millet-2019. The festival primarily had focused discussions on promoting millets as health food and encouraging farmers to go in for large scale production. One of the main mottos of the event was regional promotion and marketing of organic produce and to bring together farmers, buyers, sellers, exporters and consumers, as well as organic product processors, manufacturers of farm equipment and other stakeholders on a single platform for knowledge sharing, exploring business opportunities, networking and promoting investments.

A healthy meal buffet was prepapred by known chef Rambabu from Hyderabad, who is popular for creating sumptuous dishes using millets. “Millets can be considered super food due to the amount of health benefits they contain. Their cultivation needs to be encouraged in this part of the world as Punjab has history of reducing limited food grains, including primarily wheat rice and corn. Millets are the future of health food and agriculture,” he said in his interaction.