AMRITSAR: A faction of the Damdami Taksal has set up its headquarters at Gurdwara Khalsa Darbar in Tarn Taran’s Bhura Kohna village. 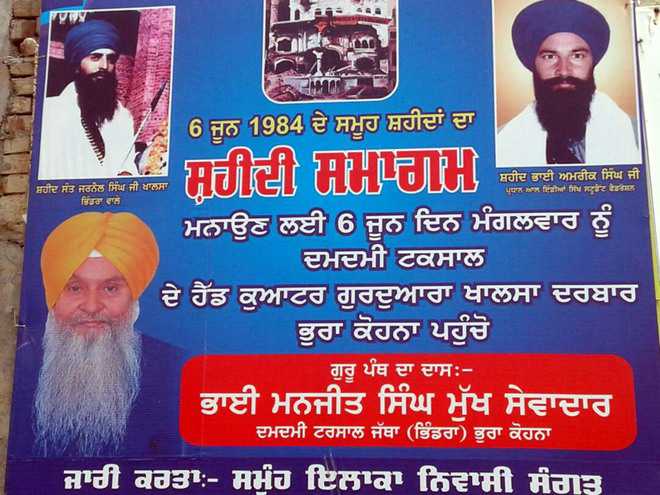 A faction of the Damdami Taksal has set up its headquarters at Gurdwara Khalsa Darbar in Tarn Taran’s Bhura Kohna village.

The Sikh outfit had put up posters in the border town Khemkaran, calling upon the “Sikh sangat to attend the shaheedi samagam of the Operation Bluestar’s anniversary on June 6 at Damdami Taksal’s headquarters at Gurdwara Khalsa Darbar, Bhura Kohna village”.

One of the posters referred to Bhai Manjit Singh as the “mukh sewadar of the Damdami Taksal Jatha (Bhindra), Bhura Kohna”. He is an SGPC member and SAD vice-president.

Bhai Manjit Singh said, “Certainly, the Taksal’s headquarters is situated at Bhura Kohna village as it is the birthplace of the 13th head of the Damdami Taksal, Sant Giani Kartar Singh Bhindranwale, and his son Bhai Amrik Singh, who was the president of the All-India Sikh Students’ Federation. He was killed along with Jarnail Singh Bhindranwale during the Operation Bluestar.”

He said Gurdwara Khalsa Darbar and an SGPC-run Sikh missionary college were situated in the same complex.

He refuted the allegations of some SGPC employees from his area participating in the religious programme at Bhura Kohna village. He said they had participated in the programme held at Damdami Taksal, Mehta Chowk.

Takht Damdama Sahib former Jathedar Giani Kewal Singh said split in the Damdami Taksal was surfacing as no Panth-approved person was appointed as its head.

Another Taksal headed by Bhai Ram Singh was situated at Sangrawan village in Batala, he said, adding that the “Damdami Taksal is, after all, a school where religious education is imparted. That school will shine which performs better”.