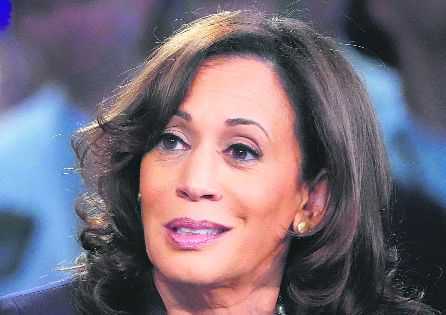 Among over 20 Democratic presidential aspirants, Harris, 54, whose mother had migrated to the US from Chennai, is running neck and neck with former US vice president Joe Biden, particularly after her impressive show at the first primary debate held recently.

According to a campaign statement, Harris brought in more than USD 7 million through her digital program alone. The campaign’s average contribution was USD 39, and the average online contribution was just USD 24. Harris launched her campaign on January 21 with a promise to reject money from corporate PACs and federal lobbyists.

So far, Harris’ campaign has brought in nearly half a million dollars this quarter from its online store, which has already sold 1,400 ‘That Little Girl Was Me’ t-shirts that feature a now-viral photo of Harris as a young girl. This was the single best-selling item in the month of June, despite not being available until June 28.

“The momentum Kamala Harris is seeing right now is buoyed by hundreds of thousands of grassroots supporters who believe in her 3 am Agenda to address the issues keeping people up at night,” said Harris campaign manager Juan Rodriguez.

“As it has been from the beginning, this campaign is powered by the people. These resources will help expand Kamala’s growing strength in this primary and put her position to win the Democratic nomination,” Rodriguez said. PTI