Will speed up drive against corrupt: PM : The Tribune India

Will speed up drive against corrupt: PM

KURUKSHETRA: Prime Minister Narendra Modi on Tuesday said his fight against corruption would be expedited further. Addressing a gathering at the launch of the next edition of Swachh Shakti-2019 programme here, Modi said there were collective attempts by the political opponents to threaten various constitutional bodies. 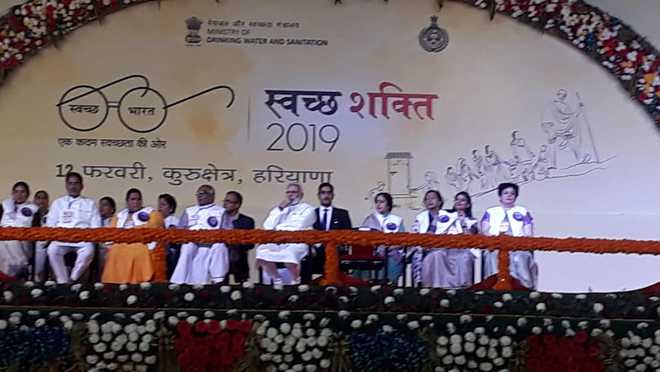 Prime Minister Narendra Modi on Tuesday said his fight against corruption would be expedited further.

Addressing a gathering at the launch of the next edition of Swachh Shakti-2019 programme here, Modi said there were collective attempts by the political opponents to threaten various constitutional bodies.

He said the faces of ‘mahamilawat’ (read mahagathbandhan against the BJP) are in a competition among themselves to threaten courts and the CBI and launch ‘abuse Modi’ campaigns. “Jo bhrasth hai, use Modi se kasht hai (the corrupt have a problem with Modi),” said the Prime Minister.

Highlighting the state’s significance in various schemes, he stressed: “Major welfare initiatives of my government, including the One Rank, One Pension (OROP) and Beti Bachao, Beti Padhao, were started from Haryana. Also, the first beneficiary under the Ayushman Bharat was also from the state.”

He said he was mocked for laying emphasis on building toilets and hygiene in his address from the Red Fort. “But I remained unmoved and worked relentlessly in this direction. I am well aware of the hardships faced by women having no toilets in their households. Women have contributed to making Swachh Bharat Abhiyan a success,” he said.

Trying to make a direct connect with an estimated 17,000 women ‘Swachhta Champions’, including representatives of panchayati raj institutions across the country, Modi said his government had successfully introduced programmes for women empowerment.

“Provision of capital punishment in sexual abuse cases, assured availability of cooking gas and a drive to construct toilets are among several initiatives taken by our government. Since 2014, under the Swachh Bharat Abhiyan, nearly 10 crore toilets have been constructed and it enabled women to become construction workers, the field earlier considered as men’s profession,” he said.

Recognising the leadership role played by rural women in the Swachh Bharat Mission, 12 activists from different states were honoured by the PM. A delegation from Nigeria also attended the function. It is studying the working model of the mission.