Parents enjoy a day out 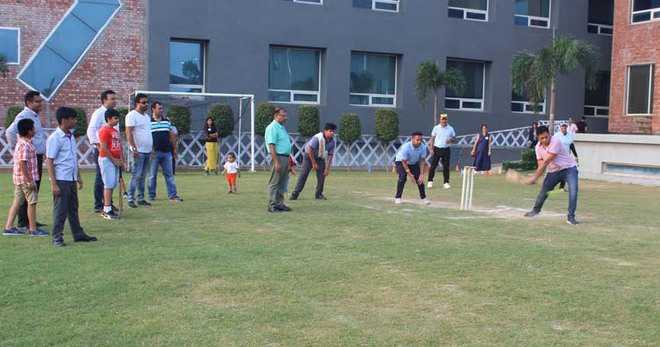 A cricket match under way on a ‘Parents Day Out’ organised at Manav Rachna International School on Monday. Tribune photo

The festival of Teej was celebrated with pomp and grandeur at Green Land Convent School, Dugri. The function included enthralling dance performances and enactments by students. Swings were set up in school and decorated with flowers. It was a gala time for students as they mesmerised the audience with traditional songs and dances. Various food stalls and exciting games were also set up on the campus.

The re-evaluation result of the Punjab School Education Board (PSEB) has been declared and Class XII students of TSSM Senior Secondary School have secured their places in the merit list after the result declaration. In arts stream, Harsimran Kaur secured 441/ 450 and fifth rank in the state. Sandeep Kaur secured 437, Amanpreet Kaur got 435, Manjot Kaur scored 433, Shiv Shankar Yadav got 432 and Jaspreet Kaur secured 429. In commerce stream, Simmy got 432. In science stream, Maninder Kaur secured 431, Ramanpreet Singh scored 430 and Parminder Singh got 430.

Keeping in mind the ideals of Arya Samaj that need to be inculcated in youngsters, a Ved Prachar Saptah was observed at DAV, BRS Nagar, under the aegis of Arya Pradeshik Pratinidhi Upsabha, Punjab. Each day, during the week long celebrations, a dainik yajna was performed, followed by recitation of bhajans. Various activities such as group discussions, poem recitation and poster-making competition were also organised on the themes of corruption, water pollution, female literacy and save girl child.

Amrit Indo Canadian Academy hosted the Ludhiana Sahodaya School Complex (LSSC) science fest for the second consecutive year. The event witnessed a participation of 231 students from 21 schools. Activities such as ‘The Science Warriors’, ‘The ScaterGories’, ‘The Mutators’, ‘The Flipper Rippers’, ‘The Budding Scientists’ and ‘The Erudites’ were organised. Three teams made it to the grand finale. Peace Public School stood first, Sacred Heart School came second and GHG Academy secured third position.

Around 45 NSS volunteers of the NSS unit of DAV Public School, Pakhowal Road visited an old age home, Nishkaam Seva Ashram, located at Pakhowal Road. Rajesh Sharma, progamme officer, and Kulpreet Kaur, cultural head of the school, headed the visit. The NSS unit donated grocery and eatables to the old age home. They interacted with the residents and learnt to shoulder the responsibilities kids have towards their parents. Principal Satwant Kaur Bhullar shared that the initiative has been taken to rise the youth above invalid dogmas of society. TNS